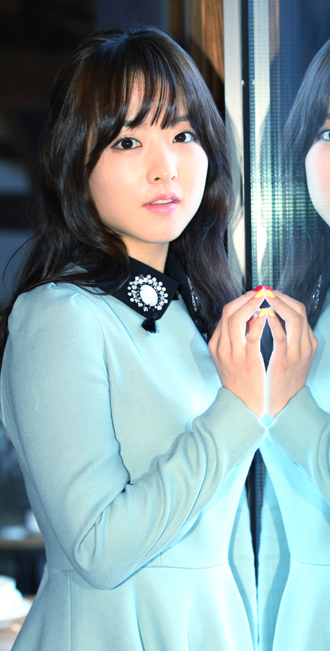 Actress Park Bo-young transformed her image to play a gangster in the new movie “Hot Young Bloods,” also known as “Blood Boiling Youth.” It was a big change from the doe-eyed innocent who befriends a werewolf in the 2012 film “A Werewolf Boy.”

In her new film, which was released on Jan. 22, Park hurls plenty of abuse and profanities while playing a famous high school punk in Chungcheong.

Park said she chose the movie because she likes to show a different side of herself with each of her roles.

“It was burdensome to use such language and even get into a fight, but I still wanted to try,” the actress said in an interview with Ilgan Sports, an affiliate of the Korea JoongAng Daily.

Q. Was it tough being so abusive?

A. I talked with my friends in junior high school with some slang, but I have never used any abusive language since then, so I had to practice a lot. First I did it at home, but I felt weird saying those things in front of my family. So I practiced when I was driving. It was perfect, practicing cursing when I was behind the wheel. Because I faced many situations on the roads, those bad words came naturally to me. I tried to forget them as soon as filming was done since I don’t want to get used to that language.

Have you been in many fights?

Nope. It was my first time grabbing a girl’s hair in a fight. I didn’t even remember how I did it after the filming was done - that’s how crazy it was. After they called “cut,” [the other girl] and I cried together and said we were sorry. Later we looked at the monitor and found that we were fighting as if we were trying to kill each other.

How was working with Lee Jong-suk?

Lee is very much like a baby. He acts cute and very mischievous. And because he is shy, he pushed me to go on stage first when we were meeting fans. So I told him that a guy should take the initiative in those situations, and he became a completely different person and said “Just trust me.” That was very cute.

Do you like to hear comments that you look young?

I think I look young because I’m so small. I never liked that I looked young, but now I’m more accepting of the idea. I don’t have long limbs, and I don’t look sexy no matter how hard I try. It’s weird to wear thick makeup to look more like a grown-up. If I am myself, won’t people take me as a grown-up one day?

Do you think you are pretty?

No. There are so many pretty people in the entertainment industry. I felt so small after I came back from an awards ceremony. I love eating, so I can’t lose the fat on my arms. While I was filming the movie, I couldn’t stop eating because the food from the food truck was so delicious.

Do you think you have worked on few dramas or movies considering how long you’ve been acting?

I know that. There are some celebrities who work simultaneously on many projects, but I can’t. I need some prep time. I’m not being picky about choosing work, but I’m just not able to choose a work quickly and get ready for it. So my goal for this year is to do more work.