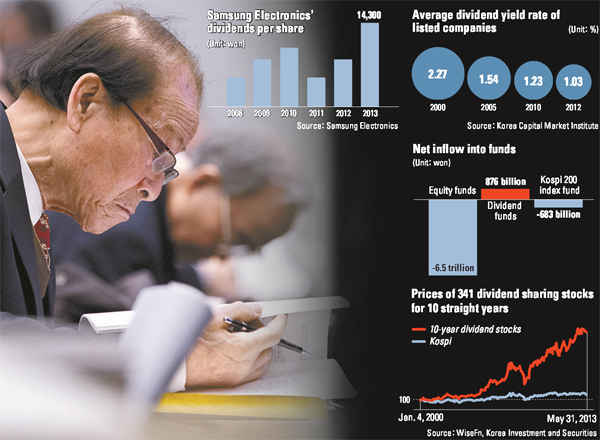 Samsung Electronics will pay dividends of 2.2 trillion won ($2 billion) for the financial year of 2013, a figure 79 percent higher than the previous year.

The company’s intention was to expand dividends to shareholders on a “significant level,” according to a Samsung investor relations manager.

But investors’ interest in dividends is increasing, and Samsung Electronics’ raising of its dividend rate from 0.5 percent to 1 percent of its annual average stock price is considered proof of that.

The interest in dividend income grew after the 2008-9 global financial crisis, and companies were expected to grow more slowly. As interest on bank deposits dropped to as low as 2 percent, dividends emerged as an alternate source of investment income. Aging investors are another factor.

“As society gets old, demand for stable incomes from dividends is increasing,” said Kang So-hyeon, a researcher at Korea Capital Market Institute.

Dividend funds are being recommended by fund experts, and local investors have bought about 876 billion won ($810 million) worth of these funds.

“Even those conservative investors wedded to bank deposits couldn’t endure the low interest rates anymore and moved on to the so-called income funds, which aggressively invest in overseas stocks with high dividends,” said Hwang Yoon-ah, a researcher from fund evaluator Zeroin.

About 310 billion won was poured into the dividend fund of Shinyoung Asset Management’s after last October, which took the lead among local equity funds. This fund invests in stocks that have been undervalued and offers high dividends. Another investment target is preferred stocks, which pay more dividends than regular stocks. As dividends were strong last year, the return on the Shinyoung fund was as high as 20 percent.

In the 2000s, Korea’s average dividend rate for companies was 2.27 percent, but it started to drop. Conglomerates like Samsung Electronics and Hyundai Motor, whose profits expanded during the past decade, belong to the IT and consumer goods industries. Conventionally, they tend to pay smaller dividends, and those industries accounted for 52 percent of the stock market capitalization in 2012 compared to 30 percent in 2000.

Meanwhile, high-dividend-paying industries such as utilities accounted for 42 percent of stock market capitalization in 2000, which shrank to 16 percent in 2012.

After the global financial crisis, even those companies that once paid large dividends chose to pile up the profits in order to protect themselves from instability. The total corporate cash reserves of Korea’s top 10 conglomerates’ 82 affiliates that are listed in the stock market was 477 trillion won in 2013, up 44 percent compared to 2010.

Analysts say it will be difficult to ignore the investors’ demand for dividends going forward.

“When corporate growth slows, even those well-off IT companies tend to gradually expand dividends to comfort their investors,” said Oh Eun-soo, a researcher at Hyundai Securities. “Microsoft and Intel are two exemplary cases.”

Oh said that Apple, which just started to pay dividends last year, is in the same boat. When Steve Jobs was alive, Apple used to ignore shareholders’ dividend requests.

“An increasing proportion of institutional investors could also be a reason for growing dividend requests,” said Kang from the Korean Capital Market Institute. centered managements are another factor. “In the Western world, where CEO management is the norm, dividends are a significant tool for major shareholders to collect earnings,” said Park In-hee, securities manager at Shinyoung Asset Management. “In Korea, most conglomerates are directly run by the major shareholders, so they are mainly interested in expanding the corporate body by investing the profit internally, rather than sharing the cash with smaller shareholders.”

Korea’s tax system is also disadvantageous to dividend sharing. Smaller shareholders who profit from dividends are taxed, whereas they do not pay tax for profits gained on trading stocks. Analysts say another factor could accelerate the trend to greater dividends.

“As it is not easy for owner families to pass along their wealth, more families will do so by giving dividends to their children,” a security company head said.

Securities analysts recommend investors do their research into stocks that pay dividends.

“Investors have to distinguish [between] these two goals: obtaining higher dividends and investing in the brand itself,” said Jung Hoon-seok, a researcher at Korea Investment and Securities.

Investors should think about dividend funds in a similar way. Dividend funds last year had high returns because those stocks were strong in the market, not because of large dividends.

“If utility stocks like Korea Electric Power Corporation, which is likely to give out dividends due to the ongoing public enterprise reform measures, make profits, then you could expect increases in the dividend rate,” said Park from Shinyoung Asset Management. “Dividend stocks are an alternative market that has emerged after the settling in of the low-growth trend,” said Oh Eun-soo of Hyundai Securities. “But you should be careful not to invest hastily because these stocks could languish for years as growth stocks are on the rise.”