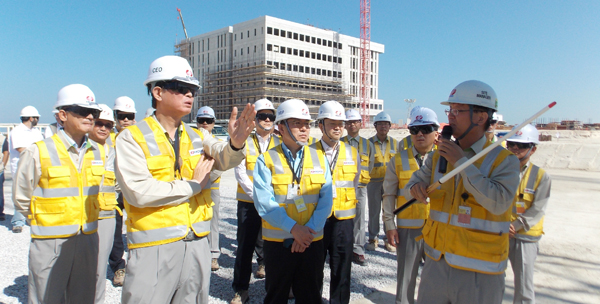 Yoon Sang-jick, center, the Minister of Trade, Industry and Energy, and CEO of Kepco Cho Hwan-eik, left in the first row, inspects the construction site of a nuclear power plant in Barakah, the United Arab Emirates.Provided by the company

Last week, Minister of Trade, Industry and Energy Yoon Sang-jick and CEO of Korea Electric Power Corporation Cho Hwan-eik visited Barakah, the United Arab Emirates, to inspect the construction site of a power plant being built by a Kepco-led consortium.

Kepco won the bid from Emirates Nuclear Energy Corporation to build four units of the APR-1400 in Barakah, a region 270 kilometers (168 miles) west of Abu Dhabi, in 2009. The APR-1400, or advanced power reactor, is a 1,400 megawatt advanced light-water reactor launched in Korea in 2002. Kepco won the bid in a fierce competition against Areva, GE and Hitachi.

The project is operating smoothly, Kepco said, with Unit 1 scheduled for completion in May 2017. The concrete for this unit was first deposited in July 2012, and core facilities such as nuclear reactors will be installed this year.

Minister Yoon and CEO Cho emphasized the significance of the project, which is Korea’s first export of a nuclear power plant built only with domestic technology. According to industry watchers, the deal serves as a turning point for Korea’s evolution from an importer to an exporter of nuclear power plants.

The electric power company stressed that huge economic effects could be expected in related industries such as construction, design and equipment manufacture. Both Korea and the UAE will enjoy considerable long-term benefits for over 100 years through the construction, operation and maintenance of the four units, Kepco said.

Kepco and the Ministry of Trade, Industry and Energy vowed to inject a continuous flow of an experienced workforce into the construction project and to strengthen its marketing in order to elevate the brand power of Korea as a nuclear power plant exporter.

The current workforce of 12,000 at the construction site includes 1,600 Koreans.