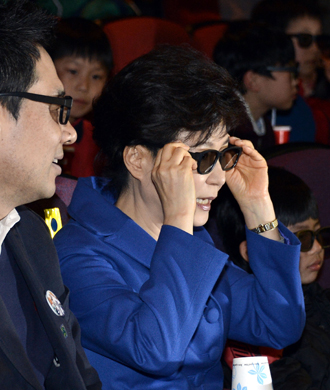 In celebration of the beginning of the Lunar New Year holidays, President Park invited some 150 youths to Daehan Cinema in Chungmuro yesterday afternoon to see “The Nut Job,” a Korean-made children’s movie with a Canadian director.

The film cost 45 billion won ($42 million) to make, and included 8.5 billion won in funding from the government. Eight billion won was provided by two public lenders.

“The reason the president chose the film was because it was released in the United States first, even though it was produced purely through Korean funding. It was directed by a Canadian and produced here,” said Moh Chul-min, the senior secretary for education and culture, in a press briefing.

The film, which is set in a New York park, tells the story of Surly the squirrel. The movie came in third at the box office over its second weekend, according to Rentrak, a U.S. media measurement and research company. So far, it has generated $40.3 million in revenue in American cinemas.

Korean performer Psy is shown dancing with the animated characters as the credits roll.

The singer and rapper of “Gangnam Style” fame attended the Night of Korea at the World Economic Forum in Davos, Switzerland, last week with the president to promote her campaign to advance the country’s creative economic pursuits.

In line with this initiative, from yesterday, the last Wednesday of each month will be marked as Cultural Day, where cinemas, museums, palaces and other cultural and sporting venues allow free entry or discounted rates.

For instance, cinemas will offer 3,000 won discounts for movies shown between 6 p.m. and 8 p.m. on those days. (However, 3-D and 4-D films are excluded from the benefit.).

Entrance fees for Hangaram Art Gallery and Design Museum, both housed inside the Seoul Arts Center, are half price. And the price of admission for professional baseball games and volleyball matches will also be cut in half.

Saenuri leaders distributed fliers promoting the achievements of the ruling party to travelers at Seoul Station in central Seoul. Likewise, opposition Democratic Party Chairman Kim Han-gill kicked off a nationwide bus trip, in which he will meet with voters across the country.