Korea is a dolphin, not a shrimp

Korea is a dolphin, not a shrimp 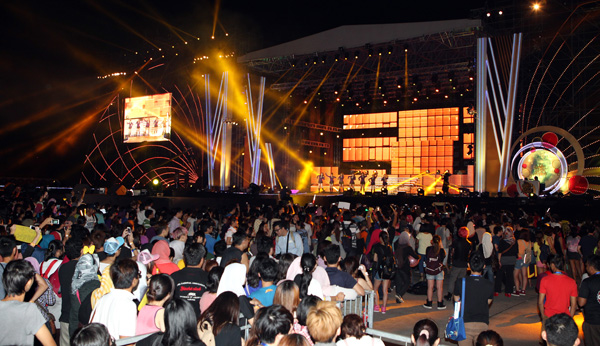 An audience watches a performance by K-pop stars at the Golden Disk Awards in Kuala Lumpur, Malaysia, last year. Southeast Asians want to know why their television schedules are being taken over by Korean TV dramas and other shows. [Ilgan Sports]

One Korean expression I’ve very rarely heard Koreans say is, “A shrimp gets crushed to death in a fight between whales.” I’ve actually heard it a lot more from foreigners who seek to explain the way Korea views its relationship with other countries. But certainly, many Korean people I have met do think of their country as a shrimp. Is this aquatic metaphor an accurate one?

From a historical perspective, it is easy to see why the idea exists: Through that lens, one can indeed see Korea as a powerless victim, forever at the mercy of other nations. But I sometimes wonder if people take it too far. Usually the view is accompanied by descriptions of Korea as “small,” “weak” or “still a developing country.” The latter claim is one I hear with disturbing frequency. Here’s another thing that disturbed me: A Korean friend who was accepted into a fancy American MBA school told me, “I got in! And I’m just some guy from Korea.” Never mind that the most disproportionately well-represented foreign nationality at elite U.S. universities is in fact … Korean.

There is a generally negative, self-doubting narrative that exists around this country. During my time as a foreign correspondent, I came to the conclusion that its greatest exponents tend to be members of the elite, such as politicians and business leaders. The higher up in society a person is, the more they seem to wish that Korea could be less like Korea and more like somewhere else - America, usually. Because Korea is “small” and “still a developing country.”

Though I admittedly have no evidence to say so, I often wonder if this narrative is being used as a means of resisting change. It is easier to oppose anything that smacks of egalitarianism or work-life balance if people are still in “developing country” mode, ready to make great sacrifices for growth and quantitative progress.

Why am I discussing this today, though? I write this column from Malaysia, where I am avoiding the brutal cold and “acid snow” (I never knew such a thing existed, but I suppose logically it should if acid rain can) you unlucky folks are apparently experiencing over there, and making plans for a new business. I’ve also been having some interviews with local journalists about a book I wrote on Korea. And from the short time I spent here, I can tell you that nobody here thinks of Korea as weak, small or undeveloped.

Whenever I mention Korea here, people’s reaction is a mix of envy and admiration. Journalists seem to envy Korea’s political progress since 1987. Koreans are placed in the same bracket as Westerners and the Japanese in terms of how wealthy they are perceived to be. Another common reaction is, “But they look down on us, don’t they?” The Korea narrative here is basically the opposite of Korea’s own self-narrative. And what would the answer be if one were to ask a Cambodian textile worker if Korea is a shrimp or an undeveloped country?

My book certainly isn’t a best-seller, and I’m not a famous person. But throughout my trip, I’ve been receiving interview requests from journalists from here, Indonesia and Thailand, who want to ask me all about Korea. They ask me what Korea’s “secret” is, and why on earth Korea doesn’t seem to be able to relax now, and enjoy its success a little. They also want to know why their television schedules are being taken over by Korean TV dramas. I think the same may be true in China, judging by the fact that the Chinese translation of my book has the phrase “the world is choking on a piece of kimchi” on the cover.

My mother sometimes calls me from back home to tell me about something Korea-related she has read about or saw on television. Those calls are becoming more frequent. She says, “I’m always hearing about Korea these days. It seems to be the place to be right now.” She isn’t alone in thinking that. Though I am totally skeptical about the idea of Hallyu (and K-pop in particular) being huge in London or Paris, for instance, there is a definite sense everywhere that Korea is “arriving.”

A fellow foreign correspondent once said to me that the shrimp comparison needs updating. Korea is no longer a shrimp, but rather a dolphin, he added that although Korea isn’t a whale like China or America, it is smart, agile and quite well-liked - and has status in the ocean because of it. A dolphin still has to keep an eye out for predators once in a while, but his overall rank in the food chain is pretty enviable, whether he realizes it or not.