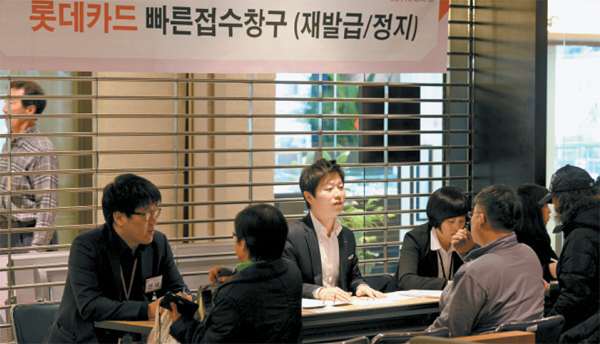 Lotte Card employees work yesterday at a branch in Sogong-dong, central Seoul. Lotte Card, KB Kookmin Card and NH Card will have their business suspended for three months beginning as early as Feb. 17, according to officials. [NEWS1]

The three companies - KB Kookmin Card, Lotte Card and NH Card - will be informed of the decision today and could have their business suspended as early as Feb. 17. Before the suspension takes effect, the companies will be allowed to defend themselves, which financial authorities will review through a committee, the financial law enforcement officials said.

If imposed as planned, it would be the harshest penalty any local credit card firm has faced over irresponsible business conduct.

The censure, according to the financial authorities, was decided upon mainly in reaction to their mismanagement of customer information, which has been the target of severe public condemnation since its magnitude was made public last month.

However, the measures were also in response to the companies’ apparent complacency when it came to handling customer information, which came to light after a recent inspection by the Financial Services Commission and the Financial Supervisory Service, the officials of the FSC and FSS added.

During the inspection, the three card companies were found to have violated existing guidelines concerning customer protection, allowing the employees from subcontractors to take out information on their customers on flash drives or laptop computers, officials said.

“Their illegality was so apparent that we don’t have any reason to delay the time [in which to punish them],” an official of the financial authorities said. “As for credit card companies, they are already banned from marketing activities, so I think the quicker the suspension begins, the better off they will be.”

Previously, card issuers found to be participating in wrongful business activities were only banned from adding new customers.

The three companies in the case in question will feel a more severe pinch, authorities said.

In addition to the three-month suspension, during which they are banned from adding new customers, the three companies will be also prohibited from providing loans, authorities said. According to the Financial Supervisory Service, KB Card and Lotte Card have provided more than 6 trillion won ($5.6 billion) in loans under such names as “card loan” or “cash service” over the last three months.

Additional services solicited by the three credit card companies through telemarketers, such as cardsurance, and a travel services business, are also likely to be banned. Cardsurance are a series of insurance products sold in a package with credit cards.

Existing customers at the three card companies will be allowed to continue to use their usual services but only at the level allowed under the terms of their existing contracts, the authorities said.

Industry observers worry such an unprecedented penalty could take a toll on the industry as a whole, not just on the companies. But an official from the financial authorities countered that concern, arguing that it would not have a huge impact, particularly because loan services are generally for existing customers only.

“For the three companies, at most, tens of billions of won worth of losses could be incurred over those three months,” the official said.

The card companies, however, said that they would take the heat. “We feel as if we were standing on top of a cliff,” said an official from one of the three card firms.

Some said banning loan services will force some of their customers with lower credit scores to turn to loan sharks.

The FSS responded by saying it will assist affiliates of the three companies in introducing loan products for customers with lower credit.

FSS officials said the watchdog is also planning to impose a penalty on the three card company chiefs later, which is expected to be as heavy as a request for their resignations.

Around 105 million financial accounts involving more than 40 percent of the Korean population were affected by the leak from the three card companies, according to authorities.

Approximately 6.1 million people have applied for the termination of their membership or for their cards to be reissued, they said.

A law firm based in Gumi, North Gyeongsang, said yesterday that it is collecting participants for a class-action lawsuit with regard to the information leak.