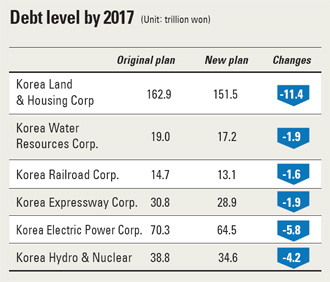 The Ministry of Strategy and Finance said yesterday that 38 public institutions resubmitted their plans to reduce debt and improve management as the government pushes harder to reform poorly operated state-run companies.

According to the ministry, 18 of the companies, which have been designated by the government to focus on debt reductions, decided to cut an additional 39.5 trillion won ($36 billion) worth of debt from their initial long-term financial management plan announced in September.

The companies had promised to reduce their debt level from 411.7 trillion won in 2012 to 497.1 trillion won by 2017. However, the government wanted them to cut more debt.

Under the new plan revealed yesterday, the companies created a plan to set their debt level at 457.6 trillion won by 2017, cutting an additional 39.5 trillion won from the initial plan. The combined debt ratio of the companies will be lowered 19 percentage points to 267 percent.

Fifteen of the 18 companies have met the government’s guideline to reduce their debt by an additional 30 percent. The Korea Rail Network Authority, the Korea Deposit Insurance Corporation and the Korea Student Aid Foundation didn’t meet the guideline.

The ministry said that because those three had proper reasons for failing to meet the guideline, mainly because of their business models, it will try to figure out another plan for them to reduce their debt.

The 18 institutions said that they will achieve the new goal by restructuring their projects, selling assets and applying efficient management such as cutting excessive bonuses.

The Korea Land and Housing Corporation (LH), which is the biggest debt holder among public institutions, said that it will try to save 8.8 trillion won by co-developing some construction projects with the private sector and adjusting the stage of its construction phases in some projects. 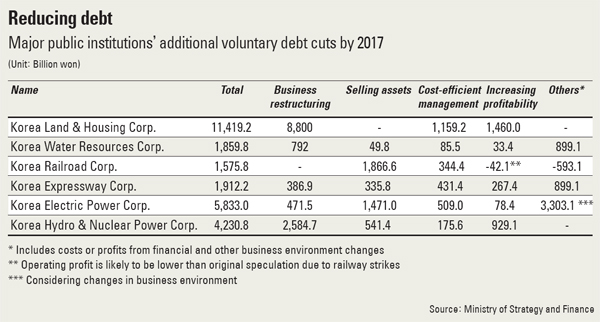 The Korea Electric Power Corporation (Kepco) and its affiliate submitted a 6.2 trillion won savings plan, proposing similar plans like LH, while the Korea Gas Corporation (Kogas) said it will save 0.9 trillion won by reducing investment for overseas businesses.

The Korea Railroad Corporation (Korail) said that it will make 1.9 trillion won by selling its land in Yongsan District, central Seoul, as the International Business District development plan was nullified, while it is also offering shares in some of its private sector-operated stations.

Some state-run companies proposed to freeze employee salaries, while asking executives to return their bonuses. Korail said that it will save 319.4 billion won by doing so.

Meanwhile, the ministry said that 38 public institutions, including the 18 focused on reducing their debt, will cut their employees’ welfare budget this year, trimming at least 160 billion won from last year’s scale.

According to ministry data, these institutions spent an average of 6.28 million won in 2013 on welfare costs for each employee, but that amount will be reduced to 4.84 million won per employee this year.

Twenty institutions that are suspected by the government of having lax management will shed 2.88 million won on welfare benefits per employee. Those companies spent 7.76 million won per employee last year.

The ministry said that 33 of the 38 companies will reform their payment systems regarding vacation bonuses, while 32 have created plans to revise their scholarship expenses for employees’ children and insurances costs.

Each institution’s plan will be reported and approved by the Steering?Committee?of?Public Institution this month and some institutions could be required to fix their plans again, according to the ministry.