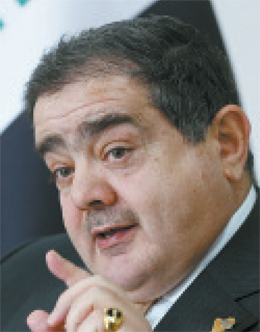 Iraq’s decision last year to buy 24 light fighter jets from Korea Aerospace Industries (KAI), a defense contractor, was part of the country’s desperate attempts to combat a domestic Al Qaeda-backed insurgency, according to Khalil Al-Mosawi, the Iraqi ambassador to Korea.

The extremist group has led an explosion of violence across Iraq - especially after the withdrawal of U.S. forces in 2011. The resulting sectarian strife and violence were blamed for claiming more than 8,000 lives last year, according to estimates by the United Nations. According to the UN’s figures, 2013 was the most violent year in Iraq since 2008.

When the United States invaded Iraq in 2003 on the premise that the country was hiding weapons of mass destruction, the U.S. military dissolved Iraq’s armed forces. Al-Mosawi said that the move led to a sharp decline in security in the border regions and hampered efforts to move beyond the poverty and pain brought on by the conflict.

“The central system of Iraq’s military forces was destroyed in 2003 by the U.S.,” he said.

“So, we find it very difficult to deploy enough security forces in the border regions.

“Iraq is waging a war on terror on behalf of other countries,” the ambassador continued.

But despite the widespread violence and insecurity in the war-torn country, Korea has proven itself to be a strong and trustworthy country of support, the ambassador said last week in an interview with the JoongAng Ilbo. When asked whether the massive aircraft deal had provoked concerns from neighboring countries, the ambassador responded that that was not the case.

“Iraq declared a clear departure from the past. So our neighbors didn’t doubt Iraq’s intention,” he said.

He went on to stress that former dictator Saddam Hussein is responsible for the devastation and lingering conflicts still ongoing in the Middle Eastern country.

“Wrong decisions by an unqualified leader [Saddam Hussein] were translated into invasions of neighboring countries, and it resulted in great atrocities,” he said, referring to Iraq’s attacks against Iran and Kuwait in the 1980s and 1990s. “Saddam tarnished the image of Iraq and put the country’s infrastructure, economy and peace in jeopardy.

“In Iraq,” he continued, “Korea is described as a country of trust. Whenever different wars took place in Iraq, many foreign workers would flee. But workers in Korean companies kept their seats in Iraq, and that led Iraqis to believe that Koreans deserve trust.”

Al-Mosawi pointed to high reliability as the primary reason why Iraq opted to do business with Korea Aerospace Industries.

According to a statement by KAI, from December, the deal to supply the 24 FA-50 jets - worth about $1.1 billion - includes support for the Iraqi Air Force over the next 20 years, which could boost the agreement’s overall value to $2 billion.

The FA-50 is a lighter version of the T-50 Golden Eagle, an advanced supersonic trainer that was developed by KAI and Lockheed Martin, an American aerospace and defense company.

The Korean government in 2010 announced a road map to push the nation’s aviation industry into the top seven in the world by 2020, with production reaching $20 billion and 70,000 people working in the sector.

As of 2012, Korea was among the top 15 countries, with revenues in aviation production reaching $2.7 billion and only 10,000 people working in the industry.

The ambassador also emphasized the investment opportunities in Iraq.

“After years of war, Iraq now lacks social infrastructures - from public transportation to education facilities,” he said. “It means Korean companies can come in and see what opportunities are ahead of them.”

Al-Mosawi added that the Embassy of Iraq in Seoul will extend its efforts to attract Korean investors and often seeks to host various activities and events to facilitate contact between Koreans and Iraqis.

Earlier this month, it held an event for the first time to commemorate Iraq’s Army Day, which fell on Jan. 6. About 780 guests, including diplomats and businessmen, attended.