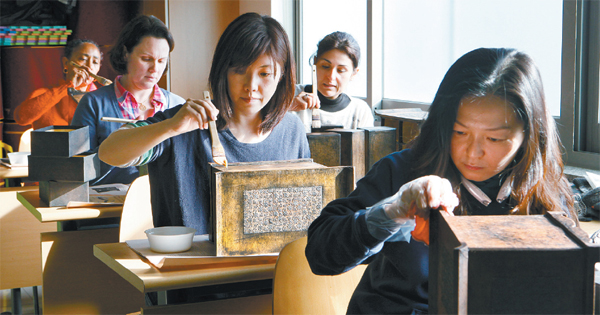 Foreign residents from Seorae Village in the neighborhood of Banpo-dong make handmade drawers using hanji during a class offered by the Global Village Center. Banpo is home to more than 600 French nationals and boasts a wide variety of restaurants and cafes. By Park Sang-moon

[The number of foreign residents in Seoul is rapidly increasing and this shift has spawned various enclaves for expatriates from all over the world, including Russia, Europe, the United States, Africa and Central and Southeast Asia. The Korea JoongAng Daily will visit each neighborhood and provide a portrait of its residential life in a series of articles, with information about restaurants and places residents and visitors alike would like to experience. -Ed.] 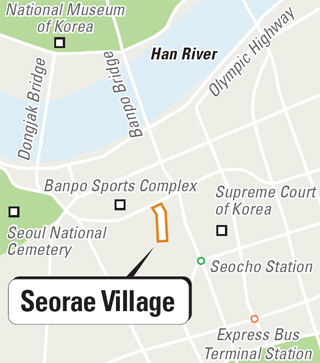 Two years ago, when Louise Marsden was considering where to live in Korea with her family, it didn’t take long for her to settle on Seorae Village, which is tucked away in Banpo-dong, southern Seoul.

Her reasons were quite practical. The French national has an 11-year-old daughter and Seoul’s only French international high school, the Lycee Francais de Seoul, is located there. A small French community has formed there, too, with various restaurants, shops and bakeries already catering to its residents. The Seorae Global Village Center, a support center run by the city government, also offers various international services, ranging from the translation of electricity bills to Korean-language classes and cooking lessons.

Marsden is one of more than 600 French residents in the neighborhood, which accounts for 40 percent of the European nation’s entire expatriate community in Korea.

“I chose this place mainly because it would be convenient for my daughter,” Marsden acknowledged. “But after I lived here for two years, I also found it really pleasant.”

Thanks to the close-knit community, it has become somewhat of a standard for real estate agencies to recommend Seorae Village to French nationals looking to plant roots in Korea.

“When I was looking for a house with my family, a real estate agent said that [Seorae Village] was a good place to live,” said Fleur Attia, who moved to Korea last August.

It might be an exaggeration to say the neighborhood is a sort of Little Paris, but small artsy cafes give the area a fresh feel and lend themselves to its exotic atmosphere. It stands in contrast to popular hangouts like Gangnam District or Myeong-dong, where big franchises and SPA-brand shops are densely clustered. (And with so many people swamping those areas, you might not even have the time or patience to enjoy yourself.)

Although the growing popularity of Seorae has brought more and more nonresidents into the region, it remains fairly relaxed compared to other downtown areas.

On the afternoon of Jan. 27, a group of eight French women, including Marsden and Attia, gathered at the Seorae Global Village Center to take a handicraft class.

This was the last class of the three-week course dedicated to making a drawer using hanji, or traditional handmade paper made from the bark of indigenous mulberry trees. The ladies were busy, polishing and drying their works and carefully adding the final touches.

“I remember seeing these kinds of artifacts in Insa-dong, and I thought they were very unique,” said Marsden, while working on her own.

“They were different from those in Europe,” she added.

Many of the women already took a different program offered by the center.

“I took a Korean-language class and a cooking class before, and it was very useful,” said Attia. “And I thought I can learn a bit about the traditional aspects of Korea if I took this hanji class.”

An official at the center said those enrolled tended to be very enthusiastic about learning new things.

“Many of the French women who come here once had professional jobs in France,” said Kim Yoon-jeong. “But many have temporarily put their careers on hold because their husbands were dispatched to Korea [to work].”

She went on to explain the daily routine of some French women in the town.

“They start off their day by taking their children to school and then usually gather near Tom N Toms Cafe to have a chat,” she said. “In the afternoon, some of them take Korean courses or cooking classes; others are engaged in activities in French community organizations.”

The Association des Francophones de Coree (AFC) is one such group. It offers French speakers opportunities to socialize and hosts parties, outings and festivals. The organization doesn’t limit its membership to French nationals, however. Established 30 years ago, the AFC has helped newcomers from French-speaking countries better adapt to Korea.

Le Cercle Franco-Coreen also engages its members in various philanthropic and cultural activities. Many involved are part of the French community, with some French-speaking Koreans. The association holds regular meetings, and members often invite others for tea. 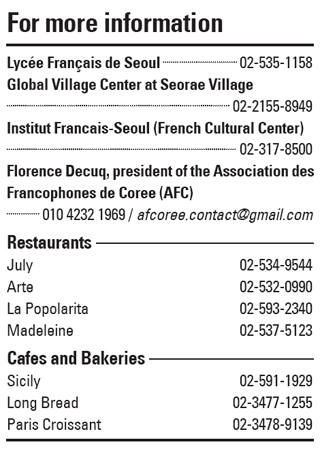 Seorae Village as a hangout

With a wide selection of authentic restaurants and cafes, Seorae Village has become a popular gathering place while still maintaining its role as a residential area.

Arte is another, and features delicious Italian dishes, including Napoli-style brick-oven pizza and Gorgonzola spaghetti, all at reasonable prices. Customers can eat inside or opt for a seat on the patio, which is surrounded by lush persimmons and pine trees.

If you want to savor both French and Italian dishes, La Popolarita is a good option. With its oak furniture and cozy atmosphere, this French-Italian restaurant boasts seven types of pizza and 16 pasta dishes. Its specialty is escargots.

Madeleine, an independent business, has no designated menu but offers a different special each day, which includes French home-style cooking.

Sicily is known for its hand-drip coffee and cream cheese pasta. And Long Bread, a brunch cafe, offers an original menu, including scrambled eggs, sausage and hash browns. Long Bread’s berry tea is also popular for its sweet, mild taste.

But perhaps one of the most well-known places is Paris Croissant. Situated on the middle of the main street, the bakery is known for its bread, made by a French pastry chef who only uses wheat flour flown in from France.

The venue devotes one floor to breads and pastries, while the basement houses cheeses, wines and cakes. The top floor is a cafe.

Comme de Patisserie, on the other hand, is a new establishment. Inspired by renowned Japanese patisserie Lilien Berg, this patisserie is bathed in vibrant reds and blues and is managed by two pastry chefs who studied in France and Japan.

It offers baked goods, from croissants and baguettes to fruit tarts and quiche.

After enjoying these French delights, walk up to Montmartre Park, on the hillside. Occupying some 20,000 square meters (4.9 acres), you can take a leisurely stroll or enjoy a panoramic view of Gangnam District. Benches line the park’s path, and the natural scenery is unparalleled.

To get to Seorae Village, take Seoul subway line Nos. 3 or 7 to the Express Bus Terminal. Take exit 5 and continue to walk down the lined pathway until you reach the highway overpass. Turn left, cross over the highway and follow Seorae road into the village.