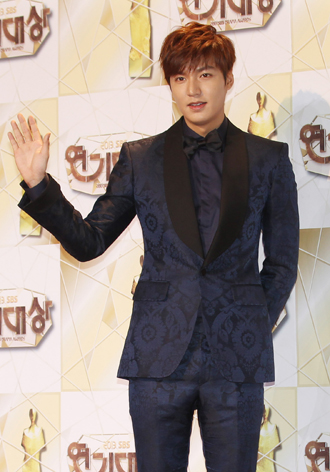 With more than 704 million people tuning in on Saturday, the program was the world’s most-viewed TV show to welcome in the Lunar New Year.

On the show, Lee, who also made an appearance last year, sang a duet with Chinese-Taiwanese singer Harlem Yu.

The song the Hallyu sensation sang was a song of Yu’s from the soundtrack to the Taiwanese version of “Boys Over Flowers” from 2001. This was no coincidence, as the Korean adaptation of the manga-based drama from 2009 is what catapulted Lee to the limelight at home and in China.

According to CCTV, the program aired on more than 202 syndicate channels across China and pulled in 30.98 percent of viewers nationwide. About 110 million more tuned in through live streams online.

Just days before the show, Lee’s agency announced that it was establishing a Chinese corporate body in order to expand its operations there.

Starhaus Entertainment said that it will try to tap into the Chinese entertainment market by working closely with Huayi Brothers.