A fine line: Inspiration or imitation?

A fine line: Inspiration or imitation? 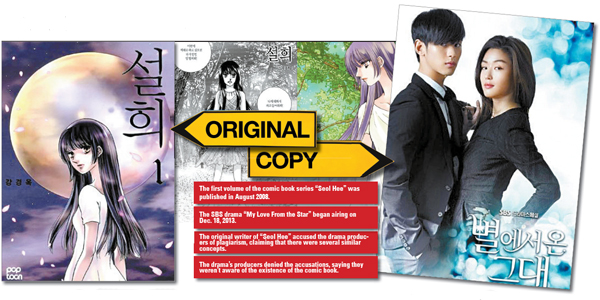 The first volume of the comic book series “Seol Hee” was published in August 2008./ The SBS drama “My Love From the Star” began airing on Dec. 18, 2013./ The original writer of “Seol Hee” accused the drama producers of plagiarism, claiming that there were several similar concepts./ The drama’s producers denied the accusations, saying they weren’t aware of the existence of the comic book.

Plagiarism has been a hot potato in Korea’s entertainment industry for a long time, especially when it comes to television dramas. Indeed, some writers toe a fine line between inspiration and imitation, while others cross it.

Consider the following synopses from a comic book and a hit TV drama on SBS that’s currently being broadcast.

Synopsis A: The story takes its motif from historical facts in the “Gwanghae Journal” of the Joseon Dynasty, written in 1609. The journal describes how “an unidentified object was seen flying around the sky, making noises like a thunderstorm and flashing lights.”

The story focuses on Seol Hee, who lives an ordinary life but becomes the heir to a large estate and gets embroiled in conspiracies involving the inheritance. At some point, Seol Hee gets hurt and receives treatment from an alien, which gives her eternal youth. When her blood passes to a human being, he or she becomes immortal as well. Because of these powers, Seol Hee has been living on Earth for more than 400 years. In the present, she meets a man who looks exactly like the man who helped her hundreds of years ago. But she’s currently dating a guy who is a top Hollywood star.

Synopsis B: This story also takes its motif from the “Gwanghae Journal.” A flying object brings an alien called Do Min-jun to Earth. The alien - a heartthrob - has been living in Korea for more than 400 years. He has adapted to living on Earth, but he must be careful not to let blood or saliva enter his body because he will have an allergic reaction. Three months before he is set to return to his home planet, he meets a girl who looks exactly like the one he met a few hundred years ago. The girl happens to be a top actress in Korea.

The former is from a comic book titled “Seol Hee” by Kang Kyung-ok. The first volume was published in August 2008. The ninth volume was published in March. The latter is from the hit television drama “My Love From the Star,” starring heartthrob Kim Soo-hyun and actress Jun Ji-hyun. The two synopses seem to share similarities, but the drama uses a different method to develop the story. 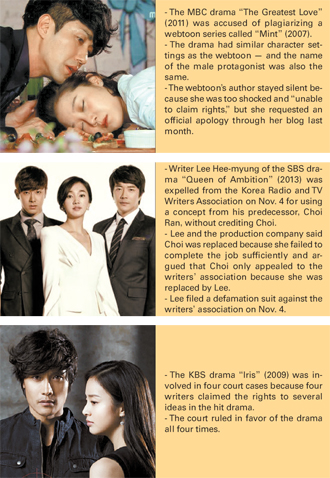 According to the Ministry of Culture, Sports and Tourism’s plagiarism prevention guidelines, plagiarism occurs when two stories have the same dialogue, characters and plot. It can also happen when stories unfold the same way or when the speed and atmosphere of the work matches another’s.

However, the ministry doesn’t have a definite yardstick of what’s plagiarism and what’s not.

“The guidelines don’t decide whether something is a plagiarized work or not,” said Jin Bo-mi, an official at the ministry’s copyright policy department. “If someone believes their work has been plagiarized, they can check the guidelines and decide whether to file a lawsuit. The final decision is made by the court.”

“My Love From the Star,” which has aired every Wednesday and Thursday since Dec. 18, has been accused of ripping off the concept of Kang’s “Seol Hee.”

After two episodes, Kang stated on her blog that there were too many similarities between the drama and her comic book, which has led her to have “no choice but to have doubts about the originality of Park Ji-eun, the writer of ‘My Love From the Star.’”

Kang claims that the two works both take their motifs from the “Gwanghae Journal” - although she admits that anyone can write anything based on historical facts. But she insisted her rights to the rest of the ideas, including the appearance of an immortal character, the use of blood, rebirth, a top celebrity, eternal youth, a protagonist meeting someone who looks exactly the same as the person from at least 400 years ago, and the fact that the protagonist dates a top celebrity.

Kang said, “Unless writer Park got major ideas from my book, it wouldn’t be so similar.”

Despite the differences in character setting and story formation, the producers and Park continue to argue.

On Dec. 22, HB Entertainment, the production company for “My Love From the Star” denied any accusations of plagiarism through its official homepage, adding that “the two works may look similar as they both take a motif from the ‘Gwanghae Journal’ in the Annals of the Joseon Dynasty.

“However, the two writers, who were intrigued by historical facts, took their imaginations in different directions.”

Park also explained in detail on the company’s website on the same day how she came up with the ideas many years ago and swore that she “had never heard of or read ‘Seol Hee.’”

Kang responded to Park’s arguments on her blog, saying that Park should have researched before she began writing.

“It looks like writer Park doesn’t do her research online. If she just searched some keywords about the ‘Gwanghae Journal,’ she should’ve found out easily about my book,” said Kang. “Park seems to insist that she hasn’t read my book. But the fact is that the two works are undeniably similar and she should admit [she is at] fault.”

On Jan. 28, Kang said on her blog that she will file a lawsuit against Park.

Despite the controversy, the drama continues to enjoy high ratings.

If all of the components of the two works were exactly the same, it would be easy to prove that one of them was plagiarized. However, such disputes aren’t always so simple, and it’s almost impossible to prove plagiarism under the current guidelines.

For example, the court that judged MBC’s hit drama “Queen Seonduk” was a work of plagiarism overturned its own ruling in the second trial, although there weren’t any changes in conditions.

“Queen Seonduk,” which was broadcast for about seven months in 2009, was judged as being too similar to the musical “Queen of Mugunghwa, Seonduk.”

The musical never made it to the stage, but the producers argued that the drama’s writers must have read the script for the musical.

Meanwhile, the Korea Radio and TV Writers Association created a “copyright infringement measure committee” and concluded in February that the drama is not a work of plagiarism. “The scenes that the musical producers make issues of can be generally imagined by anybody by just referring to historical facts,” the association said.

An official from the association said, “The decision we’ve made is not to protect the writers. Regardless of the judgments, writers who get embroiled in a plagiarism controversy get treated as culprits.

“Getting charged with plagiarism is like a death sentence to them. Therefore, the justice department must take prudence before giving the final ruling.”

Kim Wu-jeong, an official at the Korean Copyright Association, which analyzes possible copyright infringements upon court requests, said, “There’s no exact statement to define what’s considered plagiarism in television dramas. That will be too mechanical and it’s not that simple to define plagiarized works like that.

“We analyze the works by comparing the practical similarities between two works.” 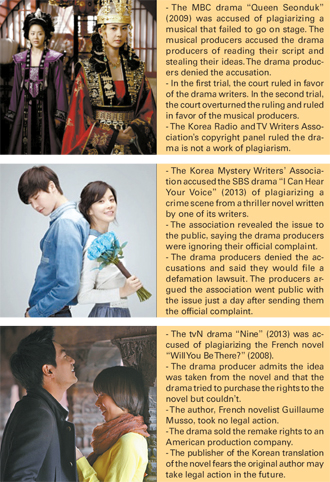 Recently, the remake rights of cable channel tvN’s time-traveling drama series “Nine” were sold to a U.S. production company, Fake Empire Productions. The news made headlines because the drama had viewer ratings of about 2 percent, which is considered strong for a cable show.

However, the drama, which aired from March to May last year, was accused of being too similar to the 2008 best-selling novel “Will You Be There?” by French author Guillaume Musso.

“Nine” focuses on the life of news anchor Park Sun-woo, played by Lee Jin-wook, who gets nine incense sticks from Nepal, each of which can send him back 20 years for 30 minutes at a time. Park uses the sticks to save his father and to get involved in other situations that happened in the past. However, his actions cause repercussions in the present.

Meanwhile, the novel depicts the life of Eliott, an esteemed surgeon burdened by the shame of failing to save his lover from an accident 30 years ago. An old man hands him 10 pills that can send him back 30 years for 20 minutes at a time. He manages to save the love of his life, but the butterfly effect caused by his actions puts his life in chaos.

While the drama was on air, viewers who had read Musso’s novel complained online that it was a work of plagiarism. Despite the controversy, CJ E&M, the production company, sold the drama’s remake rights to the American company behind “Gossip Girl” and “Chuck.”

According to news reports, CJ E&M said it was aware of the plagiarism controversy and stated that it “tried to purchase the publication rights from Musso but couldn’t accomplish it.”

However, as “the author did not make any legal proceedings regarding copyright infringement,” the company didn’t consider it to be a problem. But it might become a problem when similar television drama series get aired in the United States, which has a much larger market than Korea.

Bright World, which published the Korean translation of Musso’s book, confirmed that it “did try to file a lawsuit, but since the original author has limited knowledge of Korea, we didn’t take it that far.” The publishing company added that it doesn’t want to discuss the issue with the media anymore.

Some artists have been smart enough to follow the proper accreditation procedures, even if they were taking just one idea or theme from a work that inspired them.

Veteran film director Park Chan-wook is said to have paid 15 million won to the original author of a Japanese manga, or comic book, just to borrow the concept of the protagonist being locked up without knowing the cause.

Thanks to Park’s smart move, or simply recognizing the importance of copyrights, the award-winning film “Oldboy” was able to be remade in the United States. The American version, directed by Spike Lee and starring Josh Brolin and Elizabeth Olsen, was released in November without controversy.

The Hollywood film “Priest” (2011) received negative reviews from Korean audiences for being “nothing like the original Korean comic” of the same name. The producers followed proper accreditation procedures, despite changing the whole setting of the story.

“It’s true that Koreans have a lack of awareness about copyright infringement. They should especially never take the stance that ‘it’s not a problem unless there’s a problem,’” said Kim from the Korean Copyright Association.

“Many Korean writers seem to consider the plagiarism issue too lightly. Those who were wrapped up in controversy probably thought it was all right to lift ideas from someone else’s work that they were inspired by and passing it off as their own.”

Kim said that Koreans “tend to only deem a work ‘plagiarized’ when a work is almost identical to the original. Drama plagiarism is different than copying a design of a luxury bag.”