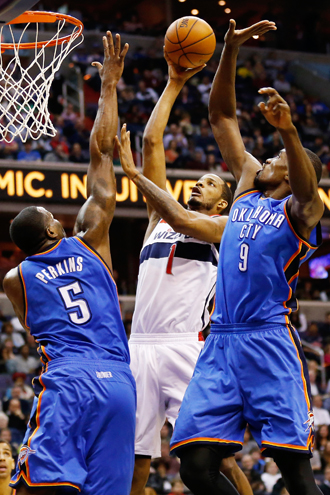 John Wall scored 15 of his 17 points in the second half and the Washington Wizards took advantage of a rare off game from hometown star Kevin Durant in a 96-81 win over the Thunder on Saturday night that stopped Oklahoma City’s 10-game winning streak.

Two days after being selected to the All-Star game for the first time, Wall also had 15 assists and six steals and went 7 for 11 from the field after halftime, more than making up for an 0-for-7 first half. Trevor Ariza added 18 points and did a solid job defending Durant, whose 26 points came on 8-for-21 shooting, including 0 for 6 from 3-point range, along with five turnovers.

The victory moved the Wizards to .500 for the seventh time this season, which means they get yet another chance to overcome an obstacle that has flummoxed them in recent weeks. A win Monday against Portland would give Washington a winning record for the first time since October 2009.

A night after going 12 for 12 from the field, Serge Ibaka went 6 for 12 and scored 14 points for the Thunder, who had a collective slump one night after shooting an NBA season-high 63.6 percent in a 25-point win over the Brooklyn Nets.

The Thunder’s only lead was 2-0. They committed 21 turnovers, including 10 in the first quarter. They had averaged 110.2 points during the winning streak - getting at least 100 in every game - but they matched their season-low for points in a game. They did have a chance to tie the score in the second half when Derek Fisher was fouled while making a 3-pointer, but he missed the free throw that would have evened the game at 58.

From there, Wall and the Wizards pulled away. A Durant turnover became a Wall dunk. Durant made three free throws after an embellishment that made the officials believe he was shooting while getting fouled by Garrett Temple, but Wall answered with a floater that gave Washington a 78-64 lead after three quarters.

The Thunder didn’t challenge the rest of the way, failing to get within single digits in the fourth.

Sitting at his locker before the game, his legs hooked up to compression tubes for a high-tech massage, Durant talked about the 100 or so tickets he had to secure for the game. Whether it was hometown nerves, or fatigue from playing in Brooklyn the night before, or the unfamiliarity of the new balls with Adam Silver’s signature on the first day of work for the new NBA commissioner, D.C.’s native son had a rough night.

Durant went 2 for 7 with a pair of turnovers in the first quarter. Midway through the second quarter, he had a jump shot blocked by Ariza, then charged into Ariza at the other end of the court for an offensive foul. The half ended with several miscues: Durant lost the ball to Wall while driving in the paint, but Wall then missed an open fast-break layup at the horn.