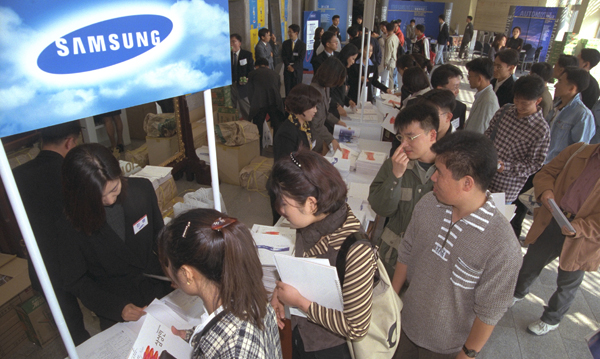 A Samsung executive visited the press room on Wednesday. He was there to give an explanation on the presidential board meeting, but he seemed dispirited. That day, most morning newspapers reported the indefinite postponement of Samsung’s new recruiting system. The executive briefly mentioned that Samsung “suffered a serious blow” from the controversy. When Samsung announced the decision to shelve the new system, it apologized for “causing confusion.”

Last weekend, the public, politicians and universities criticized Samsung’s new plan for ranking universities, which would have discriminated against women and the Honam region (South and North Jeolla provinces). It did not suit Samsung’s world-class image to rashly promote the system without foreseeing a negative public reaction. Samsung internally reflected that the plan could be seen as ranking universities and colleges.

But concerns remain. Perhaps universities and the Korean society rejected Samsung’s experiment too hastily. We might be obsessed with mechanical equalitarianism. For now, everything is back to where it started. For Samsung’s first open recruitment of the year, some 100,000 young Koreans, or more than 20 percent of college graduates, will take the Samsung Aptitude Test in April at 100 testing sites nationwide. Samsung spends more than 10 billion won ($9.3 million) to administer the test. Private institutes will continue to offer “Samsung Prep” classes. Some applicants will prepare for the test for the second or third time.

Is it justifiable to criticize Samsung’s quota for discriminating against the Honam region? The number of students that each university president can recommend is proportional to the size of the university. The difference came from the number of students each university educates, not the region. Samsung hires 35 percent of the open recruitment class from regional universities and 5 percent from low-income families. The Honam region has a relatively higher percentage of low-income applicants.

Gwangju Mayor Kang Un-tae had called on Samsung to scrap the university president’s nomination quota, but he must have known this as well. The discrimination against women calls for more thought. Samsung already allocates at least 30 percent of positions available for new hires to female applicants. Because Samsung mostly needs engineering and science majors, women’s universities that produce relatively fewer graduates with these majors may feel disadvantaged.

When Samsung announced it would shelve the plan on Tuesday, the company claimed that it would continue to study new open recruitment methods that transcend academic and regional pedigree. I hope Samsung can come up with a better idea that is reasonable and appealing to the public soon. And, hopefully, society will discuss the plan more rationally and calmly this time.

*The author is a business news writer of the JoongAng Ilbo.