The rapid aging of Korean society has become one of the biggest concerns facing the country. A thinning work force in Korea has caused a reduction in contributions for social services, and social problems stemming from medical treatments and related expenses have also increased.

One case that grabbed the public’s attention recently was the suicide and murder of a major K-pop idol’s family. The father of Park Jeong-su, better known as Lee-teuk from the group Super Junior, took his own life after killing his parents, who were suffering from severe dementia.

Park’s father cited the financial burden of caring for his sick parents as the reason for his actions.

That story, while terrible, is not an isolate incident.

Korea has the highest suicide rate among people aged 65 years or older among countries in the Organization for Economic Cooperation and Development (OECD). Eighty senior citizens out of 100,000 people commit suicide in Korea - a number far above the 31.7 average in the rest of the OECD.

In 2011, suicides by senior citizens accounted for 33 percent of all the suicides committed that year, which was about 5,000.

Many senior citizens reportedly did not want to burden their children with soaring medical bills, while depression stemming from illness was another major cause.

As Koreans are living longer, more interest is rising in long-term care insurance and policies that pay for custodial care later in life, such as nursing home expenses or home care.

This type of insurance did not generate much interest when it was first introduced in the 1990s, with the Japanese-style name of “nursing care insurance.” But large?foreign insurance companies started promoting the policies a decade ago, changing the name to “long-term care insurance.” When an insured person needs care because of an illness like dementia, an insurance company can provide funds for care in a lump sum or on a monthly basis. The international insurance giants actively marketed them as advanced insurance products that were popular in the United States and Europe.

But at that time, Korean consumers were not interested. 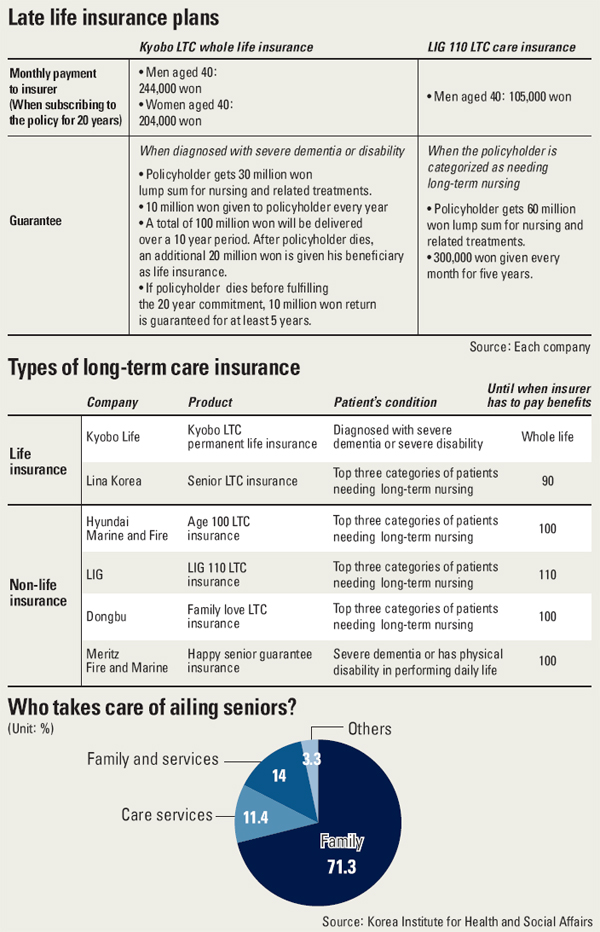 “Severe illnesses that require long-term care insurance usually occur at very old ages, so consumers back then did not feel much necessity to prepare from a young age,” said Yoon Young-kyu, a product development manager at Kyobo Life Insurance.

At the time, many consumers felt that the monthly payments of 150,000 won, or $138.70, was way too expensive for future nursing services, which people didn’t even know they would need.

But since then, the aging of Korean society has sped up. The number of people aged 65 or older suffering from dementia rose to 541,000 in 2012, compared to 421,000 in 2008. The Ministry of Health and Welfare projects the number of people with dementia will double in 20 years due to increased aging.

Currently, care for the elderly is estimated to cost about 70,000 won per person per day. That works out to more than 2 million won per month for each person. But the most an individual can currently get is 1 million won per month, even including national long-term care insurance.

And as life expectancy lengthens, the amount of time people will need care will grow, too.

The long-term care insurance, which was once considered unnecessary, sells well nowadays.

Seniors who feel they need long-term care and need aid can apply for help with the National Health Insurance Service. Seniors are classified into three groups depending on the severity of their illnesses.

Level 1 is for seniors who are unable to sit or stand and who require help in all parts of daily life. Level 2 is for the seniors who suffer midlevel dementia and need some help getting around.

Level 3 is for those less seriously afflicted.

Hyundai Marine and Fire Insurance rolled out its long-term care insurance in 2012, making sales of about 21.4 billion won from 227,971 clients.

Its insurance provides a lump sum amount of 100 million won for those classified as level 1 long-term care recipients.

Other insurance companies, including LIG, Dongbu, Meritz Fire and Marine, and Heungguk have also jumped into the market.

Most non-life insurance companies give a lump sum ranging from 30 million won to 100 million won for level 1 seniors. Some products offer monthly payments of 300,000 won to 600,000 won for five years, like a pension.

On Jan. 20, Lina Korea also introduced a new senior care insurance, which requires renewal every 10 years. For monthly payments of 26,900 won, a 65-year-old adult is guaranteed to receive 10 million won when diagnosed with a level 1 disability.

People have started to realize that the burden includes not only one-time medical expenses, but also ongoing fees to take care of seriously ill seniors.

“Both the parents’ generation, which does not want to burden their children, and the children, who face those potential burdens, are the two main clients who join our insurance,” said an official from Meritz Fire and Marine.

Experts advise to check the terms and conditions of policies carefully, as they differ among products.