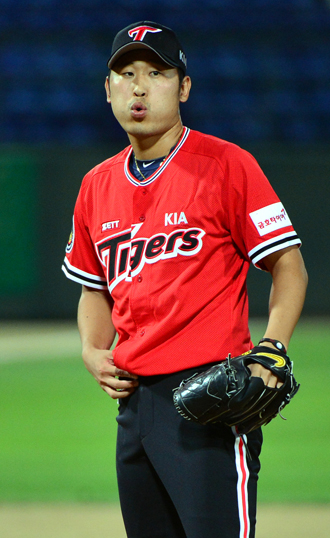 Four or five major-league teams are reportedly interested in making an offer to free agent Yoon Suk-min, the Korean league’s best pitcher, who hasn’t found a new team for the 2014 season. The leading contenders to land the 27-year-old right-hander are the Baltimore Orioles and the Texas Rangers, a source told the Korea JoongAng Daily on the condition of anonymity.

In a bid to drum up interest, Yoon had a pitching tryout with two Major League Baseball teams - the Orioles and the San Francisco Giants - on Saturday at a university campus in California. An official of the Boras Corporation, which represents Yoon, confirmed to Korean media on Sunday that Yoon threw about 30 pitches in front of scouts from the two teams. The official told Korean media that the tryout was not a test but more a demonstration to prove that Yoon is 100 percent healthy because some teams have questioned his durability.

When some U.S. media reported in October that Yoon could have a tryout to attract teams, Boras Corporation officials said that wouldn’t be happening. They have since changed their minds because there isn’t much time left until spring training.

The source said that five teams are interested in Yoon - the two teams from the tryout and the Rangers, Chicago Cubs and Minnesota Twins. But the Orioles, which has acquired many Asian players in recent years, appears to be the top contender.

It seemed unlikely that the Orioles would make an offer to Yoon because general manager Dan Duquette recently told U.S. media that he is seeking to sign a veteran pitcher, but after three starters - Scott Feldman (Houston Astros), Jason Hammel (Cubs) and Freddie Garcia (Atlanta Braves) - left the team as free agents, the Orioles need to replace them. The team also traded closer Jim Johnson to the Oakland Athletics in December.

The Orioles currently have two starters - Chris Tillman and Chen Wei-Yin of Taiwan. Chen is the most expensive pitcher in the Orioles’ lineup ($3.65 million per year).

The Orioles have acquired several Asian players, including left-hander Wada Tsuyoshi of Japan, who signed with the Cubs this hot stove season and has played for the Orioles before. Baltimore also signed Korean free agent submarine reliever Jung Dae-hyun in 2011, although that deal was later canceled when he failed a physical examination.

When Duquette was the general manager of the Boston Red Sox, he signed four Korean players: left-hander Lee Sang-hoon, 43, who is now a coach for the Goyang Wonders, right-hander Kim Sun-woo of the LG Twins, starter Song Seung-joon of the Lotte Giants and infielder Chae Tae-in of the Samsung Lions.

“Since Yoon can take any role in a team’s pitching system, teams like the Orioles might be interested in him,” the source said. “The problem is that Yoon only wants to be a starting pitcher.”

The other team interested in acquiring Yoon is the Rangers, which recently signed Korean outfielder Choo Shin-soo to a seven-year, $130 million deal. A Boras Corporation official said the Rangers have been monitoring Yoon for two years and that its interest is getting more serious lately since starting pitcher Derek Holland injured his left knee while playing at home with his dog. He will miss the first half of the season.

“The Orioles seem like a team that Yoon would have less competition to take one of the team’s five starting pitcher spots,” analyst Song Jae-woo said.