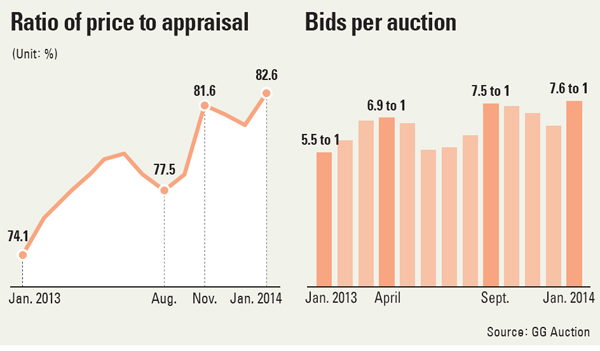 Mothers with toddlers on their backs and senior citizens with canes were among around 300 people gathered at Seoul’s largest court auction of real estate at Seoul Central District Court in Seocho-dong, southern Seoul, on Jan. 23.

An 84-square-meter, or 904-square-foot, house in a Lotte Apartment complex in Samseong-dong, southern Seoul, was auctioned off for 737 million won ($679,545), about 92 percent of the appraised amount, with the winner screaming as if he had won the lottery.

“I missed it by 900,000 won,” moaned Mr. Baek, a 55-year-old resident of Jamsil-dong, southern Seoul. “I will keep placing bids because through auctions I might be able to purchase a house if I add a little bit to the current security deposit for the jeonse house I’m living in.”

The competition has grown since the beginning of the year under expectations that real estate prices will recover.

“As housing prices are recovering, the gap between prices in the private market and appraised prices on auctions is actually growing,” said Kang Eun-hyun, head of EH Auction Institute. “So auctions are getting popular.”

According to GG Auction, a local auction information company, the average number of people who place bids on apartments in the greater Seoul area is now 7.6, higher than 5.5 a year ago. The ratio of sales price to appraised value is also on the rise. The average selling price was as high as 82.6 percent of the appraised value at the end of January, up 5.1 percentage points in just five months.

The rise in prices on auctioned real estate applied to apartments of all sizes.

The ratio of sales price to appraised value for small to midsize apartments of 85 square meters and under rose 5.3 percentage points to 89 percent.

The ratio increased 4.7 percentage points to 78 percent for mid- to large-size apartments bigger than 85 square meters.

Smaller apartments were the most popular, and 7.4 percent of all small and midsize residences sold for more than their appraised value, up 6 percentage points compared to January 2013.

“The appraised value of houses is typically set six months before the properties are auctioned,” said Ha Yu-jeong, a researcher at GG Auction. “Since the real estate prices have been rising in the meantime, the differential narrows. And you get a house at lower than the market price at the end of the day, even if you buy it at the appraised amount.”

However, analysts say auction prices are getting more and more expensive. They warn potential buyers to check market prices before going for auctions.