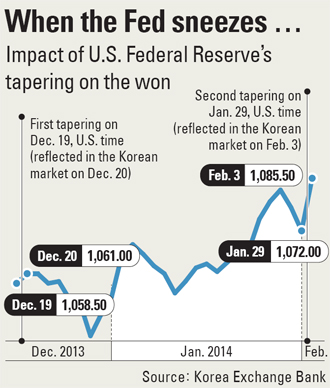 The Year of the Horse seems to be bringing volatility to the Korean financial market. Both the country’s securities market and currency plummeted on the first day of trading after a four-day Lunar New Year holiday, amid continuing U.S. Fed tapering and currency crises developing in emerging markets like Argentina and Turkey.

Since Jan. 23, when worries started spreading in earnest, foreigners have sold about 1.5 trillion won worth of Korean shares.

On Jan. 29, the U.S. Federal Reserve announced its decision to taper its bond-buying program by another $10 billion to $65 billion a month beginning this month.

The main worries are over liquidity problems in emerging markets, although analysts and government officials say Korea is pretty resistant to Fed tapering risks thanks to fundamentals that are much stronger than in other emerging market.

“During the holiday, the market was hit hard by news from the U.S., and investor confidence sharply contracted due to financial woes in emerging countries,” said a research fellow at Shinhan Bank’s financial engineering center.

There was more gloomy news over the holiday, including a weak manufacturing index coming out of China and deflation worries rising in Europe.

Some analysts forecast the won could hit the 1,090 won mark soon.

“The plunge was bigger than expected,” said a foreign exchange analyst at Kookmin Bank. “If the current trend continues, the won-dollar rate could rise to 1,090 won soon.”

Some are worried about market volatility affecting the country’s exports.

“For Korea, exports are the biggest concern,” said a research fellow at Woori Financial Research Institute (WFRI). “Market disruptions in emerging countries can affect Korea’s exports since the country’s market share in those countries is quite significant.”

A recent report by the Export-Import Bank of Korea said U.S. Fed tapering decisions could increase the possibilities of liquidity crises in emerging markets like Brazil and Turkey.

“Since these countries account for 11.3 percent of Korea’s total exports and overseas investment, the country can’t let down its guard,” the report said.

“Unless the tapering goes too fast, its impact will decrease gradually,” said another analyst at the WFRI.

“The impact on emerging markets was huge when Bernanke first announced the decision in May, but markets soon calmed down thanks to good foreign exchange measures in each country.”