With shutout, Arsenal back atop Premier League

With shutout, Arsenal back atop Premier League 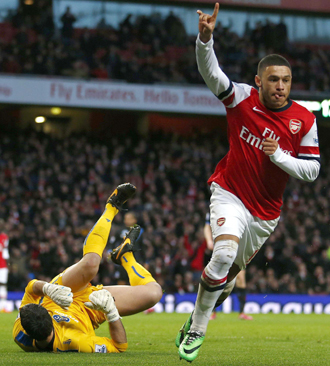 Arsenal’s Alex Oxlade-Chamberlain celebrates after scoring a goal against Crystal Palace in London on Sunday. [REUTERS/NEWS1]

Arsenal’s Alex Oxlade-Chamberlain, who was out for five months with a knee injury, scored twice to lead his team to a 2-0 win over Crystal Palace on Sunday and back to the top of the Premier League.

They might only stay there until Monday, when Manchester City, who they knocked off the summit, plays third-placed Chelsea at Etihad Stadium, but the 20-year-old Oxlade-Chamberlain’s return to fitness should be a huge boost for the Gunners in the title run-in.

Oxlade-Chamberlain, who was injured in the opening match of the season against Aston Villa, has made three substitute appearances in the league as well as starting in the FA Cup against Coventry City before Sunday’s return to full Premier League action.

Manager Arsene Wenger decided to play him in the center of midfield rather than his usual wide position and was rewarded for his decision.

“Crystal Palace was well organized and united in their desire to do the job,” Wenger said.

“They are a physically strong side and we knew we had to take advantage of our chances, and we did.”

Arsenal needed to be patient to break down Palace, which has improved since Tony Pulis became manager at the end of November.

Although they rarely threatened, they defended well until the second minute of the second half when Oxlade-Chamberlain found space at the far post to score with a delicate lob from a Santi Cazorla cross.

Palace went close to an equalizer when Cameron Jerome headed straight at Wojciech Szczesny, but the game was all but over when Oxlade-Chamberlain scored to make it 2-0 in the 73rd minute.

That was his first goal for Arsenal since December 2012 and his first in any match since scoring for England against Brazil in Maracana Stadium in June.