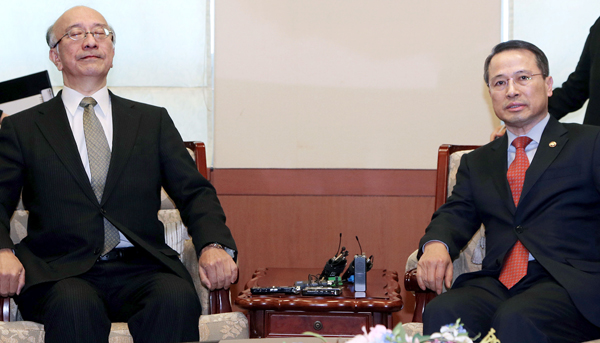 As Korea celebrated the Lunar New Year holiday, the Korean government and Japanese Prime Minister Shinzo Abe exchanged a few jabs. Abe started the fight - at a plenary session of the upper house in Japan, he said his government was considering lodging a claim for the Dokdo islets at the International Court of Justice. The next day, the Korean government responded that Abe was bluffing and that he knew very well such an act would be meaningless. The International Court of Justice is a United Nations agency that settles legal disputes between member nations.

But even if Japan was to bring the case to the ICJ, the court could not take it unless Korea agreed to participate. Knowing that, Abe mentioned the ICJ with an obvious intention. He wants to make the argument over Dokdo look like a territorial dispute. However, since Abe’s controversial visit to the Yasukuni Shrine, the international community has turned against Japan, and Abe’s attempt is not likely to garner support.

More importantly, Abe’s attempt could become grounds to reaffirm Korea’s effective control of the islets under international law. In the Pedra Branca dispute between Singapore and Malaysia in 2008, the International Court of Justice ruled that the outlaying island in the South China Sea is under Singapore’s sovereignty, while acknowledging Malaysia’s “ancient original title.” The court reached the conclusion because Malaysia didn’t protest when Singapore built a lighthouse on the island in 1847.

Currently, Korea is in effective control of Dokdo after sending residents and police there.

Those precedences are reasons why Seoul needs to make more aggressive diplomatic efforts in terms of Dokdo. The rhetoric that Dokdo is Korean territory and that we don’t need to get involved in unnecessary debates will hardly stop Japan’s fabrications. It was meaningful when the Ministry of Foreign Affairs strongly criticized Japan’s claim by mentioning the “nostalgia of imperialism” on Jan. 28. A Foreign Ministry official said that the key is to make it clear that Abe is a liar.

Of course, Abe and his government won’t listen to our arguments. However, intellectuals in Japan and people around the world will hear our voices. The Korean Ambassador to the United Nations, Oh Joon, did the right thing when he firmly condemned Japan at an open discussion session of the UN Security Council. Civilian efforts will also help, as specialists from the nations that suffered damage from Japan’s imperialistic pillaging are set to publish a joint report soon.

On Jan. 29, Foreign Minister Yun Byung-se also gave a resolute message through his actions when he visited former “comfort women” - the first time a head of Korea’s Foreign Ministry has done so. Unfortunately, the schedule was announced only a few hours before the visit, and because it happened right before the Lunar New Year holiday, it didn’t receive enough media coverage. To make up for the missed opportunity, let’s hope to see the government’s next sharp admonitions covered extensively by the media in the near future.