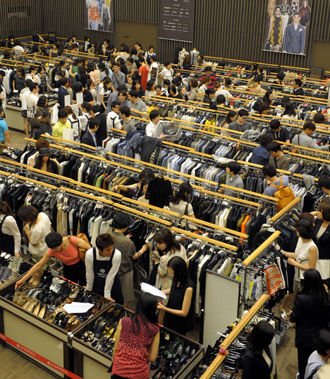 The Lunar New Year holiday last week was all about mingling with friends and family and sharing homemade food and gifts. Many of the presents that were exchanged during the holiday were department store gift cards, which can be used like cash.

Now, as part of post-holiday marketing activities, retailers are trying to reel those gift vouchers back in by inspiring consumers to spend on imported luxury goods like handbags and apparel.

This month, all three local department stores - Lotte, Hyundai and Shinsegae - will be holding special sales events at their branches, offering discounts on imported luxury items. The first two retailers to hold such events will be Lotte Department Store and Hyundai Department Store.

Lotte’s event will be held at its main branch in Sogong-dong, central Seoul, from Thursday to Sunday. The scale of the sale has grown, with 40 new brands taking part this year, and 120 different brands will be sold at the event including Etro, Mulberry and Dolce & Gabbana.

After the event at its main branch in central Seoul, Lotte Department Store said it will go on to offer the same discounts at its Jamsil and Daegu branches for four days from Feb. 13, and at its Busan branch from Feb. 27.

Hyundai Department Store said over the weekend that its branch in Samseong-dong, southern Seoul, will hold a four-day sale of imported fashion items from Thursday. Items will be discounted up to 70 percent. Around 40 brands will participate in the event. Hyundai’s Apgujeong branch in southern Seoul will hold a similar sale over the same period for men’s fashion wear. Brands that will take part are Hugo Boss and Black Label by Ralph Lauren.

Shinsegae Department Store will hold its sale from Feb. 13 at its main branch in central Seoul. From Feb. 21 to 23, the same event will be held at its Gangnam branch in southern Seoul and from Feb. 27 to March 2 at its Centum City branch in Busan.

“The number of brands participating in the event has increased to 60, which is up 20 percent from the previous year,” said an official from Shinsegae Department Store. “We plan to carry on the momentum of a buying spree of overseas fashion items.”

Major brands include Armani, Dolce & Gabbana, Diesel, Vivienne Westwood, Marni and Alexander Wang. “Consumers’ response to the upcoming sales events will be a test of whether consumer sentiment has fully recovered or not,” said Choi Min-do, a sales strategy official at Shinsegae Department Store.