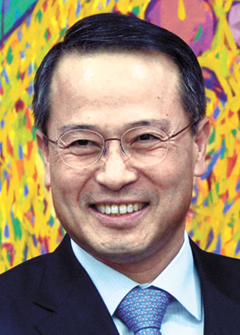 Kim Kyou-hyun, the first vice minister of foreign affairs, was named yesterday by President Park Geun-hye as the head of the newly revived National Security Council secretariat, which will function as a coordinator of foreign and security policies.

“As a career diplomat primarily assigned to posts in the Foreign Ministry, nominee Kim has shown superb abilities in leadership, negotiations and crisis management,” Ju Chul-ki, the senior presidential foreign affairs secretary, said at a press briefing yesterday, “but also possesses a strategic mind for national security due to his experience as an international cooperation official in the Ministry of National Defense.”

Kim, 60, who studied dentistry at Seoul National University, will also serve as the first deputy chief of the presidential office of national security.

The presidential office last month proposed a revival of a permanent NSC secretariat amid continued North Korean threats and other regional tensions.