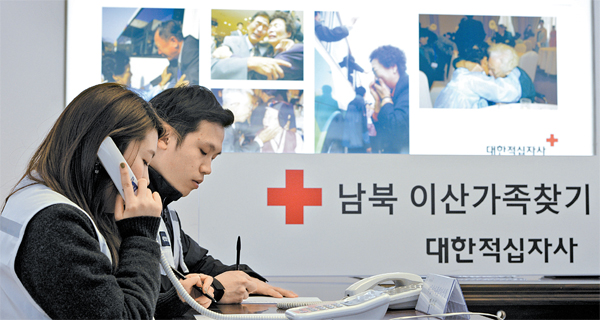 Breaking a week of silence, North Korea yesterday offered to meet with South Korean officials on Wednesday or Thursday for working-level preparations on the upcoming reunions for families separated during the 1950-53 Korean War.

The North did not respond to the South’s proposal sent on Jan. 27 for the reunions to take place between Feb. 17 and Feb. 22.

When suggesting those dates, Seoul requested that a meeting be held Jan. 29 at Tongilgak, the northern part of the Joint Security Area, though Pyongyang never responded.

“North Korea, via the Red Cross telecommunication channel in Panmunjom, at around 10 a.m. today, sent a telephone message, which stated that South Korea can choose between Feb. 5 and Feb. 6 for a working-level meeting,” Kim Eui-do, a spokesman for the Ministry of Unification, said during a briefing yesterday.

When asked by reporters about the likelihood that the reunions will actually take place on Feb. 17 - just two weeks away - Kim said that the South Korean government would prepare for the reunions “as soon as possible” given the urgency of the issue, hinting that the dates will go ahead as planned.

However, North Korea could still revise the dates and will possibly take issue with South Korea’s annual joint military drills with the United States, which run from early this month until April.

On Jan. 24, Pyongyang sent an open letter to Seoul as a follow-up to a similar proposal on Jan. 16, in which it asked that the South create a mood conducive for reconciliation, ceasing its criticism and canceling the upcoming joint military exercises.

President Park Geun-hye was the first to recommend family reunions during her New Year press conference on Jan. 6.

Should the reunions be carried out this time, it would mark three years and four months since the last were held and the 19th time reunions have taken place since the idea was put into action in 1985.

During the first three days of the six-day reunion, 100 South Koreans will meet with their North Korean siblings, while the last three days will be designated for those from the Communist state.

One person will be allowed to meet up to five siblings from the other Korea, with the resort in Mount Kumgang accommodating nearly 1,000 North and South Koreans per session.

Reunions were scheduled for last September but were abruptly cancelled by the North just a few days ahead, after 100 South Koreans had already been chosen by the government.

Since then, one person from that group has passed away, and three others have relinquished their spots due to illness.

As with previous reunions, about 100 South Koreans will be transported to a residence in Sokcho, Gangwon, near the inter-Korean border, for an orientation session a day before the official session starts. Upon arriving at the Mount Kumgang resort, they will meet with their North Korean family members and dine together.

On the morning of the second day, families will be allowed to chat and exchange gifts privately in their rooms.

During past reunions, the giving of gifts caused some friction. While the North Korean government handed out identical presents to be delivered, those from South Korea brought individually prepared gifts that varied in financial value.

“The content of the gifts differs between South and North Korea. And the North Korean government tended to collect and distribute gifts from South Korean families en masse, but there were a lot of delivery mistakes - either they went missing or they were given to [the] wrong people altogether,” said a former official with the Ministry of Unification.

The gift giving will be followed by lunch and an excursion to Samilpo Lake near the mountain.

The final day will allow families an hour together before departure in the morning. Last encounters tend to be the most emotional, with most South Koreans expressing deep sorrow and some even passing out. North Koreans, despite a strong show of emotion, seem to quickly collect themselves.

When authorities give the last call for departure, the family members say, as if rehearsed: “We are well in the arms of the Democratic People’s Republic of Korea. Take care.”

North Korean families are accustomed to group life, because it is the only kind of life they know, an official at the Korean Red Cross said. “Rationality [rather than emotion] seems to dominate them,” the official added.

Ever since the first reunions in 1985, a total of 18,143 South Koreans have met with their North Korean family members. The number accounts for a mere 0.18 percent of the estimated 10 million families here who were separated, a number that is even more astounding considering only a select few are chosen in each round.

The previous Lee Myung-bak government saw only two rounds - one in 2009 and the other in 2010. Suspended inter-Korean interactions came in the aftermath of the shooting of a South Korean female tourist by a North Korean guard in July 2008 and North Korea’s sinking of the Cheonan warship and shelling of Yeonpyeong Island in 2010.

Since 2005, separated families have been allowed to have conversations with each other via a videophone system.