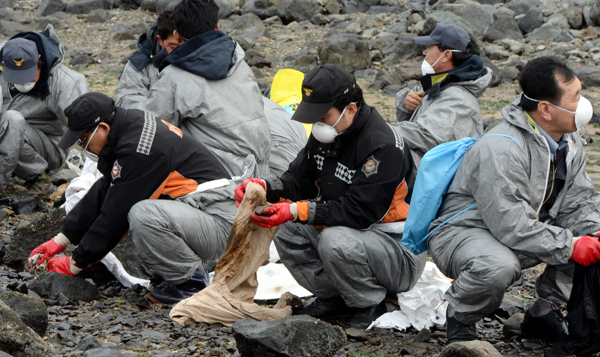 The Coast Guard yesterday estimated the amount of oil leaked in a spill off the southern coast to be 164,000 liters (43,324 gallons) - 205 times larger than the initial 800 liter estimate offered by GS Caltex, the company that owns the cracked pipeline blamed for the leak.

On Friday, a tanker hauling crude oil crashed into a landing bridge as it tried to dock in Yeosu, South Jeolla, after deviating from its route.

The collision caused damage to the oil pipeline operated by GS Caltex.

The Yeosu Coast Guard said the spill had engulfed approximately 10 kilometers (6.2 miles) from where the leak first occurred and that it would take one to two weeks to clean up.

Kim Sang-bae, head of the Yeosu Coast Guard, attributed the leak to the Singapore-registered tanker Wu Yi San, saying it failed to dock properly at the port.

“The tanker was trying to dock while not keeping a safe speed,” Kim said during a press briefing yesterday. Kim noted the leak occurred at 9:35 a.m. Friday, but GS Caltex didn’t report it to the Coast Guard until 10:05 a.m.

Local fishermen and residents are afraid of a repeat of 1995 when the Korean oil tanker Sea Prince ran aground during a typhoon, spilling 5,000 tons of oil on the southern coast.

Officials expect the spill to hurt the sale of seafood from the area. Many of the nearly 600 residents from the village near the dock make their living collecting Manila clams and seaweed near the affected site.

“We keep investigating in accordance with the relevant laws to hold those involved for the leak accountable,” Kim said.

Four days after the spill, more than 950 police, residents and government officials were working together to contain it.

In 2007, Korea’s worst-ever oil spill occurred off the coast of Taean, when 10,500 metric tons of oil leaked from a Hong Kong-registered tanker.

The government’s compensation for that accident was less than 30 percent of what residents requested.