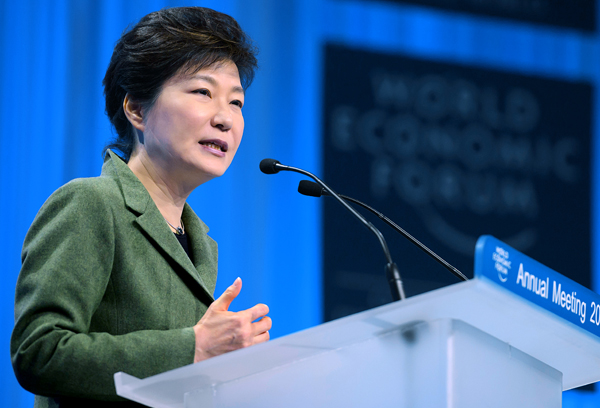 President Park Geun-hye speaks last month during a panel session on the first day of the Annual Meeting of the World Economic Forum in Davos, Switzerland. Korea is best qualified to step up and call out for rescue measures for emerging markets. [AP/NEWSIS]

In September 2009, President Barack Obama was facing an apocalyptic disaster few U.S. leaders had encountered. The Wall Street meltdown, caused by the subprime mortgage crisis, drowned the U.S. economy and the big three automakers that symbolized American industrialization. The tumultuous wave soon reached European shores, sending all the largest economies in the Group of Seven scurrying to map out contingency plans.

Until the protectionist Plaza Accord signed at the Plaza Hotel in New York in 1985, the G-7 nations - Germany, the United States, Japan, Britain, France, Italy and Canada - accounted for 80 percent of the world economy. Their intervention was enough to reshape it. But their share fell below 50 percent after the rise of emerging markets like Brazil, Russia, India, China and South Korea. And the rich man’s club expanded from the G-7 to the Group of 20.

The gathering of leaders from the world’s biggest economies became an annual routine after their concerted chorus and performance in combating the 2008 global crisis. The first summit was hosted by South Korea in November 2010. Global actors produced a collaborated piece named the Seoul Development Consensus to fix the imbalances in the world economy by stimulating demand in the largest markets, like the deficit-ridden United States, Germany and China.

They had hoped the greater role of state intervention would save the world economy from the wave of protectionism that generated the Great Depression in the 1930s. The United States was able to carry out massive quantitative easing action - limitless bond purchases based on ultra-low interest rates - three times under the global endorsement.

Five years later, the United States and Europe finally came out of their tunnels. Their wars were done. The multitrillion-dollar bond-purchasing program had been an extraordinary experience for the world economy. Ending it couldn’t be “normal” because it was unprecedented. The tapering, or winding down of the monthly purchase program, inevitably has taken a toll on the global economy, primarily the emerging sector that benefited the most from loose U.S. liquidity.

As the United States couldn’t fight the subprime mortgage crisis alone, emerging markets also cannot handle the capital flight simply through individual interest rate increases. But we no longer hear of concerted or synchronized global actions from Washington. The spike in currency values and the plunge in financial markets in emerging markets did not stop the U.S. Federal Reserve in its exit program. It went on cutting back $1 billion in the monthly purchase program.

The Federal Reserve Open Market Committee did not make any mention how the withdraw would pose an immediate risk to emerging economies. It could argue that the U.S. central bank has the constitutional duty to stabilize employment and consumer prices in America and nowhere else. But would it have made the same argument if other countries intervened to depreciate their currencies against U.S. monetary stimulus action? How could it have had the liberty to implement three rounds of quantitative easing without the silent endorsement and support of the global community?

Everything comes down to business. Wall Street is the most ruthless example. Goldman Sachs Chairman and CEO Lloyd Blankfein bluntly advised investors to run from emerging markets.

“In good times, emerging markets feel like a credit business … in name specific, micro. When things get bad and tips over into that category, forget the names. It’s a macro market. It’s emerging markets. Forget about the differences,” he said in an interview.

The Korean government is no different. It merely stepped up monitoring on overseas markets and capital transactions. But, strictly speaking, in the eyes of foreign investors, the Korean market - albeit its sound current account surplus and foreign exchange reserves - is an emerging category. But the country also hosted the G-20 summit four years ago. It organized the emergency meeting when the United States and Europe were in a crisis. Korea is best qualified to step up and call out for rescue measures for emerging markets.

Last month’s World Economic Forum in Davos, Switzerland, was convened under the title “Reshaping of the World.” But it is a pity President Park Geun-hye has not raised global awareness on the gravity of the crisis in the making, or called for concerted endeavors from global leaders. But it’s not too late. The crisis in emerging markets has not yet reached a boiling point. Crisis is another name for an opportunity. It’s time for the economic team of the Park administration to step in and perform its act.

*The author is the business editor of the JoongAng Sunday.