Gov’t measures to get women back to work

Gov’t measures to get women back to work 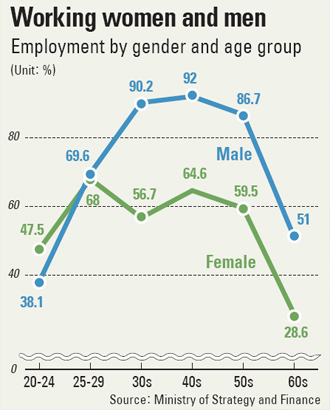 In order to reach its goal of achieving a 70 percent overall employment rate, the government yesterday announced measures to help housewives and mothers return to the workplace.

The measures are organized by period - pregnancy and delivery, caring for children under eight and re-employment - and are supposed to reflect the government’s determination to root out chronic discrimination in employment for women in Korea.

“Women have been suffering discrimination in employment, promotion and salary levels, and some were forced to quit their jobs basically for being women. We shouldn’t wait another minute to compensate them for their devotion to our economy.”

From October, male employees will be able to go on paternity leave within 90 days of a child’s birth, with a full monthly base salary in the first month of leave. The measure will apply to fathers of a second child.

Currently, fathers taking leave receive 40 percent of their base monthly salary with an upper cap of 1 million won ($924). The ceiling will be raised to 1.5 million won.

There will be no distinction between maternity and paternity leave. Both will be called parental leave.

The measure was one of President Park Geun-hye’s campaign pledges.

Non-salaried workers can receive similar benefits if they sign a new contract with their current employers within 15 months of giving birth to a child.

The government will provide those employers with 300,000 won to 600,000 won per employee, depending on contract terms, as an incentive for maintaining their workers.

Female workers who choose not to take leave can shorten their work hours to 15 to 30 hours per week and receive 60 percent of their base salaries for up to two years, up from the current 40 percent. The maximum amount will be raised to 937,500 won from 625,000 won.

To help companies hire substitute workers for parents on leave, the government will pay 600,000 won per employee for small businesses and 300,000 won for large businesses - double the current amounts.

The Finance Ministry said it will pour 4.6 trillion won into government projects related to women in the workplace this year.

Two major sources of the increased budget for female employment measures will be the nation’s employment insurance fund and the governmental budget.

“Since the current financial situation of the employment insurance fund isn’t good, more of the money will come from the budget,” said Employment Minister Bang Ha-nam.