To Saturday: This is a preview of an exhibition Korean ceramist Shin Gyung-kyun will hold in late March at Unesco’s headquarters in Paris.

One hundred pieces are on display, including 40 moon jars - white, round porcelain jars that look like a full moon. Such jars were first made in the Joseon period (1392-1910) and inspired many modern Korean artists.

Shin, 49, mastered his skill under the guidance of his late father Shin Jeong-hui, who was also a ceramist.

Go to Anguk Station, line No. 3, exit No. 1 and walk for five minutes. 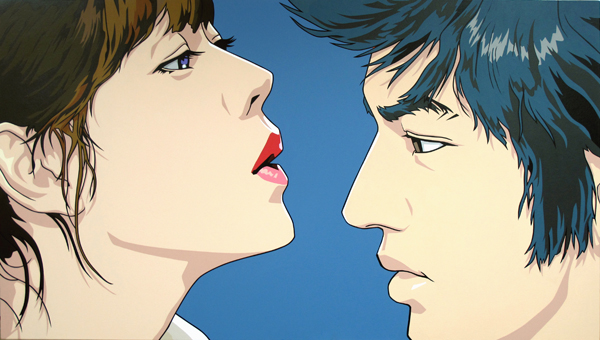 To Feb. 20: “Graphic Novel” is a group exhibition of East Asian artists inspired by comics, consisting of Lee Dongi of Korea, Sun Xun of China and Koichi Enomoto of Japan.

“The three artists were teenagers in the 1980s and 1990s when color televisions became popular,” Arario said. “ Sub-culture, including games, animation and cartoons, formed their inner selves in a dream world.

The exhibition aims to read the differences of characteristics, perspectives and purposes between the artists representing graphic novels in Korea, Japan and China.”

ALL THE WAY FROM KOREA

To Feb. 23: This group show of five local artists includes work from Son Bong-chae, who presents 3-D paintings he created by drawing pine trees in an East Asian style on bulletproof glass panels, overlapping them to create one piece of artwork.

The other three are Lee Lee-nam, a popular media artist, Han Ho, who is gaining fame for his installations of light effects, and Jang Seung-hyo, who is well known for encompassing and combining various art genres, including sculpture, photography and video art.

Admission is free. The gallery is open daily from 10 a.m. to 7 p.m. It is closed on national holidays. Go to Apgujeong Station, line No. 3, exit 3, and walk for 15 minutes.

To March 16: This is a retrospective of the renowned Spanish designer Javier Mariscal, who created the mascot Cobi for the 1992 Barcelona Summer Olympics and co-directed the 2010 animated feature-length film “Chico and Rita.”

The exhibition presents 1,200 pieces, including furniture, interior designs, sculptures, drawings and others in three rooms with the themes of “Sketches,” “Collage Landscape” and “Colors Parade.”

To March 30: The exhibition features one hundred paintings produced by 57 Korean modern painters from the 1920s to the 1970s.

They include not only popular artists like Kim Whan-ki and Park Soo-keun but also artists who have been forgotten amid the turmoil of modern Korean history.

Admission is 6,000 won for adults, which covers the admission to the palace.