Gloom grows as Kospi closes under 1,900

Gloom grows as Kospi closes under 1,900

An employee at Korea Exchange Bank in downtown Seoul yesterday looks at a board at the bank’s headquarters showing the Kospi closing below 1,900 for the first time since August 2013. [NEWS1]

For the first time in six months, Seoul’s main bourse yesterday closed below the 1,900 level as foreign investors continued their selling spree, mainly due to resurfacing signs of economic slowdown in the United States and plunges in its major stock markets.

Worries about market jitters affecting the real economy are on the rise, making analysts’ sunny outlooks at the beginning of the year seem distant.

The Korean market is now being squeezed by the possibility of downturns in advanced markets - which buy Korea’s exports - and increasing uneasiness about currency crises developing in emerging markets.

Analysts are now questioning the government’s ability to reach a 3.9 percent growth target by the end of the year unless the current market volatility ends soon.

The market opened 1.3 percent lower at 1,894.96 in the morning, in response to the announcement of a factory index by the U.S. Institute for Supply Management, which fell to 51.3, its weakest in eight months following plunges in three major American stock markets. 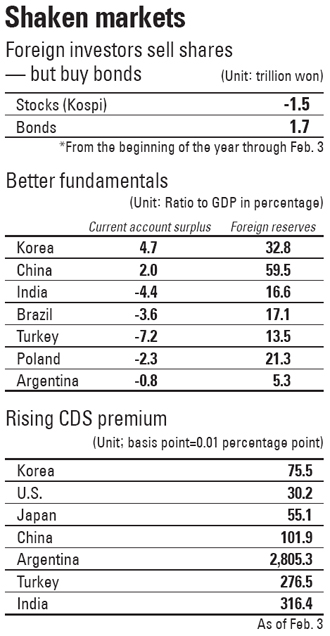 Contrary to earlier optimism by local and foreign market experts, the Kospi has been struggling due to widening insecurity in emerging markets and unfavorable reports on China’s economy. The country’s CDS premium, referring to risks involved in the market, rose 0.75 percent or 75.5 basis points as of Feb. 3.

“Investors in the Korean market have had a strong belief that the U.S. economy was recovering, but the latest manufacturing index proved them wrong,” said Kang Hyun-ki, an analyst at I’M Investment and Securities. “The unfavorable environment is likely to be maintained perhaps until early in the second quarter.”

Some forecast a bullish market may start picking up at the end of this month at the earliest.

“Although it seems difficult to expect immediate rebounds, gradual ones are possible in the near future because it can be a good chance to buy cheap stocks,” said Kim Byeong-yeon, a research fellow at Woori Investment and Securities.

Some analysts maintained their positive view of the Korean market.

“The Kospi won’t fall much,” said Hong Seong-kuk, chief researcher at KDB Daewoo Securities. “It’s just that investors are not buying [stocks] because the situation looks bad. We are different from those emerging markets considering our robust current account surpluses. It’s absurd to compare Korea with Argentina.”

“Korea is more attractive than those vulnerable emerging markets, and it has strong fundamentals,” said Lee Chang-mok, chief researcher at Woori Investment and Securities. “But for Korea, a global economic recovery will be the key to its economic goals this year, considering that Korean exporters will benefit from better conditions in emerging markets.”

International experts generally view Korea as an advanced emerging market compared to the more vulnerable emerging markets like India, Indonesia, Brazil, South Africa and Turkey. But worries about those markets could spread in a contagion effect to hurt Korea as well.

“While individual countries have their unique characteristics, those with solid macro frameworks and good governance and institutions have been able to establish foundations for continued access to private external financing and positive growth prospects,” said Charles Collyns, chief economist at the Institute of International Finance.