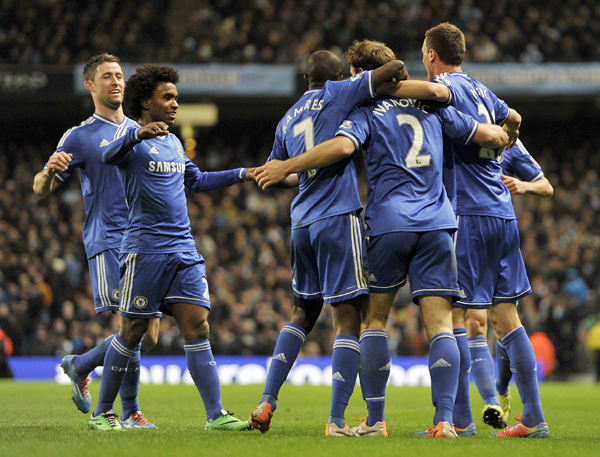 Chelsea’s Branislav Ivanovic, fourth left, celebrates with his teammates after he scored the first goal of the game against Manchester City at the Etihad Stadium on Monday. [AP/NEWSIS]

Chelsea’s battling victory put the Londoners level on 53 points with second-placed City and within two points of league leaders Arsenal after 24 games. It also ended City’s run of scoring in 61 consecutive home league games since 2010.

Ivanovic struck just after the half-hour mark when Ramires’s effort was blocked by Vincent Kompany and fell for the Serbian right back, who let fly first time from the edge of the box and saw his powerful left-foot shot nestle in the far corner.

City had chances to equalize but Chelsea, who also hit the woodwork three times, were always a threat on the break in an absorbing contest, which was decided by Mourinho’s ability to find the perfect blend between attack and defence.

“We showed a lot of character, and created a lot of chances. We spent a good couple of days working on their strengths and weaknesses - that is typical Jose Mourinho,” Chelsea captain John Terry told Sky Sports.

“We have a couple of games at home now to kick on. We must win them as we dropped points against West Ham last week,” he added referring to a frustrating 0-0 draw at Stamford Bridge.

Monday’s game was billed as a potential early title decider by some, such has been City’s incredible form and the widely held belief that wily Chelsea are their most likely challengers despite Arsenal having led the race for much of the season.

In the battle between the team with the best attack and the outfit with the meanest defence in the league, both managers chose a more defensive midfield than usual to try to take charge of the game at the Etihad Stadium.

Center backs Martin Demichelis and David Luiz were employed in the centre of the park for City and Chelsea respectively and the visitors’ playmaker Oscar was left on the bench but the game started openly with both sides having decent sniffs at goal.

Chelsea continually broke at pace and Ramires tapped the ball into the net with the offside flag raised before having a very good effort saved by Joe Hart after the shaky home defence had fallen away during another foray by the Londoners.

Purists feared the often cautious Mourinho might “park the bus,” an accusation the Portuguese coach has used about sides playing too defensively against his team, but instead the game was easy on the eye.

A lively atmosphere in an unusually dry Manchester added to the sense of occasion but there was stunned silence apart from an ecstatic band of away fans as soon as Ivanovic struck the winner, having not been tracked by Silva.