Wizards go above .500 for first time in four years

Wizards go above .500 for first time in four years 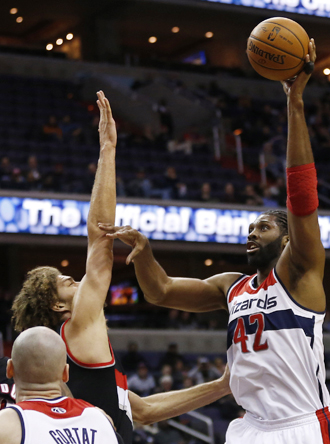 The Washington Wizards moved above .500 for the first time in more than four years Monday night, accomplishing the feat on their eighth try this season by pulling away in the second half to beat the Portland Trail Blazers 100-90.

John Wall scored 22 points, and Trevor Ariza added 20 for the Wizards, who hadn’t had a winning record since beating the New Jersey Nets to improve to 2-1 on Halloween in 2009. Washington committed six turnovers while forcing 16 from Portland, and Wall and Co. didn’t look back after Kevin Seraphin led a 12-0 run that put the Wizards up by 17 early in the fourth quarter.

“Finally,” guard Bradley Beal said after the final whistle. “It took us a long time.”

Damian Lillard scored 25 points, and LaMarcus Aldridge had 20 to lead the Trail Blazers, who have lost four straight road games.

The Wizards are 120-236 since the Oct. 31 victory 51 months ago, a .336 winning percentage, better than only Minnesota and Sacramento over that span. The streak of futility fell just a few days shy of spanning an entire Winter Olympiad.

Another way to put the quest to move above mediocrity in perspective: The Trail Blazers could lose their next 20 in a row - and still be comfortably above .500.

But the Wizards have now topped two of the West’s top teams in back-to-back games, having taken care of Kevin Durant and the Oklahoma City Thunder on Saturday. The Trail Blazers arrived averaging a league-best 108.3 points and shot 61 percent in the first half, but Portland was six for 17 from the field with seven turnovers in the decisive third quarter.

Wall pumped his right arm and smiled as he dribbled out the clock, and the fans gave their finally-winning team a standing ovation.