2014 may be year home appliances get smarter

2014 may be year home appliances get smarter 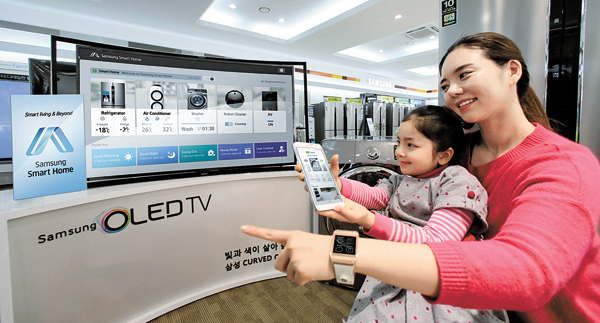 Models demonstrate Samsung Electronics’ Smart Home service, through which users can access and control home appliances with smart devices including the company’s Galaxy Gear smartwatch. Provided by the company

Wearable computing devices, once only imagined in science fiction, are coming to the market so rapidly that analysts expect 2014 to be the base year of the wearable era.

Drawing a tighter spotlight, however, is another sci-fi inspiration inching slightly more slowly into the realm of reality: the smart home.

Homes have been computerized in science fiction movies since firefighter Montag’s abode was in the 1966 film “Fahrenheit 451.” The concept was first explored in Korea in the late 1990s when fast broadband connections began to be installed around the country. Many real estate developers wanted to exploit the idea but failed because the technologies and how to use them didn’t come together, leaving the idea as a gold mine for some future time.

Electronic-device makers have tried their hardest to get homes smarter, introducing integrated forms of home electronic appliances. But most of them merely linked two or three different types of appliances.

Drawing on lessons of trial and error with those prototypes, companies are now linking every device in the home by using Voice over Internet Protocol, which is evolving from its basic use on Internet phones.

Samsung Electronics is planning to commercialize a service that will allow a person to whisper “Good Night” to the TV remote controller, which will then turn off the TV and adjust all other appliances - the air-conditioner and the lights, for example - for slumber mode.

It’s called the Samsung Smart Home service, which the company unveiled at the Consumer Electronics Show in Las Vegas in January. Other facets of Smart Home are Home View, which gives people access to live images inside their houses through digital cameras or cameras embedded in electronic appliances, and Comprehensive Device Control, through which people use a smartphone or the Galaxy Gear smartwatch to control home appliances remotely. 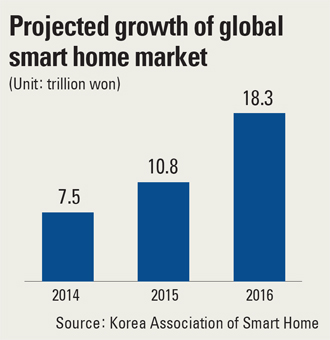 The tech giant promises to roll out the service in the first half of this year.

“Since the launch of our Smart Home committee in the middle of last year, we have prepared steadily for Samsung Smart Home to start another new Smart Innovation,” said Hong Won-pyo, president of Samsung Electronics’ Media Solution Center.

“With Samsung Smart Home, we are bringing our capabilities as the world’s No. 1 manufacturer of smart devices to make the connected home a reality for today’s consumers.”

LG Electronics is also planning to introduce a similarly integrated smart home service, which it has branded HomeChat, next month.

The service functions through Line, a popular mobile messaging service created by Naver, and enables a user to “chat” with remote-controlled home appliances. LG plans to unveil its first HomeChat service with a refrigerator before expanding to other devices such as laundry machines, ovens, and robot vacuum cleaners called Roboking or Hom-Bot, all within this year.

Home appliance makers are in the lead in Korea, but mobile carriers are also jumping on the smart-home bandwagon. All three mobile operators are providing smart-home utilities pivoting around their telephone services.

In addition, the high-definition videophone has 58 TV channels and can stream 1.7 million pieces of music and 24,000 videos on demand.

The company’s Kibot 2 is a robot nanny for children to have access to a variety of educational multimedia content. It is considered part of the Smart Home service.

LG U+ is branding its all-in-one home electronic device as the Homeboy. First introduced last August, the device was basically a Galaxy Tab 3 made by Samsung Electronics. On the tablet PC, LG loaded various smart-home functions to control appliances such as telephone, TV, audio player, e-book reader and closed-circuit television.

Last month, LG rolled out the Homeboy G Pad, which changed the basic device to the company’s G Pad 8.3.

“We have put every home-appliance-related service into the Homeboy,” said a spokesman.

SK Telecom, the nation’s largest mobile provider, has been the laggard. But last month it unveiled the B Box, an Android-based hub that integrates home media functions and provides tailored services for users such as their favorite TV channels.

“There’s lots of room for growth in the smart home,” said Lee Young-gon, an analyst with Hana Daetoo Securities.

“Smart devices were functioning separately, but they are evolving to a stage in which each device is connected organically,” Lee said. “The Internet of Things is no longer a dream, and the smart home system is one platform where such a vision can be realized.”

According to the Korea Association of Smart Home, an alliance of local companies trying to build up Smart Home businesses, the size of the global smart home market is estimated to reach 7.5 trillion won ($6.9 billion) this year. It is expected to grow to 10.8 trillion won next year and 18.3 trillion won in 2016, the association said.

Local companies like Samsung are seeking early dominance in the potentially lucrative market, but they face strong challenges from other big-name IT companies such as Apple, Google and Microsoft.

Last month, Google made inroads into the smart-home business by buying Nest Labs, a maker of Internet-connected devices, at $3.2 billion.

Lee said Samsung and LG are in a good position to exploit the smart-home business thanks to their strength in home electronic appliances.

But he said their sticking to their own products in designing smart-home services could impede their goals.

Samsung, which failed previously with proprietary services such as its Bada operating system, is taking the cue.

“Samsung Smart Home is different from existing smart-home services in that it has an open-door ecosystem in which devices from other electronics companies could sync to,” said an official of Samsung Electronics.

“People will feel the difference when our services come out. We expect it to create real momentum for the mass popularization of smart home.”