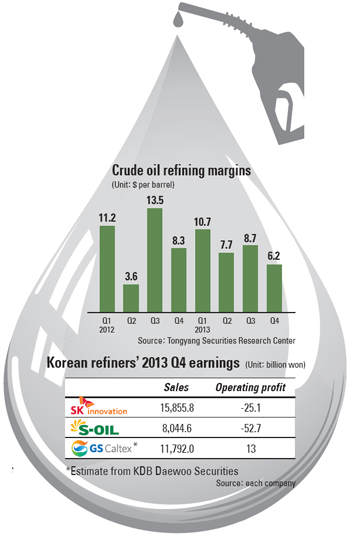 The loss mainly came from its core affiliate, SK Energy, which controls the company’s petroleum business, as it posted an operational loss of 309.8 billion won in the fourth quarter. SK Innovation said that this was caused by inventory-related losses in line with crude oil price fluctuations.

For the whole of 2013, SK Innovation had sales of 66.67 trillion won, down 9 percent from 2012, while its operating profits slid 19 percent to 1.38 trillion won. SK Petrochemical and SK Lubricants helped to overcome the losses suffered by SK Energy, its fiscal data showed.

“The company had a somewhat sluggish performance due to the economic downturn,” said Ha Sung-keun, head of the finance office at SK Innovation. “However, we’ll strive to make this year a strong foothold for future growth by fruitfully finalizing large investments going on in Ulsan and in the Incheon PX Plant expansion, as well as the lube oil plant construction in Spain.”

The situation was much the same at S-Oil, the nation’s third-largest oil refiner. The company also slid into the red in the fourth quarter of 2013, incurring an operating loss of 52.7 billion won, down from a 35.2 billion won profit a year earlier.

Korea’s No. 2 player, GS Caltex, has not yet released its earnings for the fourth quarter, but according to estimates by KDB Daewoo Securities, it is expected to post an operating profit of 13 billion won on 11.79 trillion won in sales.

Industry insiders blame the reducing margins for the losses. All refiners buy crude oil from overseas, refine it, then sell gasoline, diesel and kerosene. As a result, refining margins are considered the barometer for company profits.

According to data from the Tongyang Securities Research Center, the refining margin for a barrel of crude oil was $10.70 on average in the first quarter of 2013. However, that margin slid in 2013, reaching $6.20 per barrel in the fourth quarter.

The reason for the declining margin is falling demand from overseas, according to Tongyang Securities. Korean refiners sold more than 70 percent of their product to overseas, but Indonesia, which is one of its big customers, decreased the amount of subsidies on gasoline in the second half of last year. As a result, local refiners lowered retail prices, which damaged their profitability.

“The expansion of exports allowed refiners to bulk up their profits, but it also forced them to be sensitive to macroeconomic factors, such as oil price changes, the global economy and regional supply and demand,” a recent report from Korea Investors’ Service said.

For this year, companies said that a continuing oversupply problem means that it will not be easy for producers to escape the slump.

“Global oil prices are expected to show a weak, steady trend, with the supply increasing in non-OPEC countries and a bullish outlook for the U.S. dollar from the tapering of quantitative easing,” an SK Innovation spokesman said in a release. “Although refining margins could be influenced by the growing supply from capacity expansion in China and the Middle East, a slight improvement in the refining margin is anticipated, considering the shutdown schedule for regional refineries, including in Japan and Australia, and a positive demand outlook in line with the global economic recovery.”