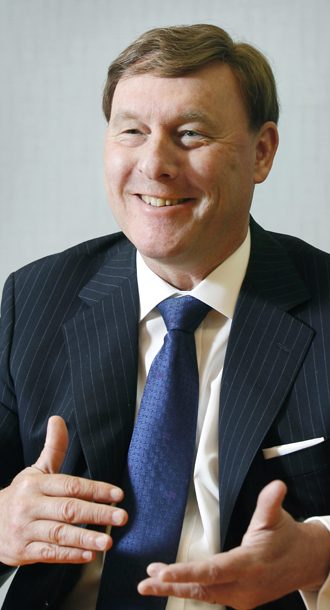 John Walker, Chairman of the Macquarie Group of Companies, Korea

It is hard for Korean financial institutions to become global if incidents like the recent data leak at credit card companies happen at home, said John Walker, chairman of the Macquarie Group of Companies, Korea.

“We [Macquarie] have always said that if you want to create a global institution, you have to be No. 1 in your own country,” Walker said in an interview with the Korea JoongAng Daily last month.

Walker, who arrived in Seoul in 2000 to establish Macquarie’s Korean unit, shared his thoughts on the recent data theft incident, the Korean government’s efforts to nurture local financial firms to become global partakers and what makes Korea special as a market for foreign investors.

Q. How would you look back on your 14 years in Korea as a foreign businessman? What challenges have you faced?

A. There’s no such thing as a perfect market. Whether you’re in China, Hong Kong, Singapore, Australia, the United States or Europe, it’s kind of unreasonable for a foreign institution to come into a market and expect it to be any easier than other markets. Every market has its challenges in terms of regulations and policy. What I generally say is that I don’t see any dramatic difference between Korea and other markets. Rather than just analyzing a particular market, it’s important that you analyze by comparing the whole of other countries. The only fair way to judge the regulatory and policy environment in Korea is to do it on a comparative basis and then on the outcome.

One great outcome is that Korea was able to weather the global financial crisis in 2008. That was great for companies like ours. We were operating in a market which continues to be strong and successful, and continues to be profitable and strong. Obviously, there have been some things that have been frustrating about the regulations, but we were able to have an open dialogue with the government and regulators. We had every opportunity to make our points. But, clearly, things like credit card information being leaked, these are not good.

What are your thoughts on the data leak incident?

If you were to advise local financial institutions hoping to reach out to overseas markets and financial regulators, what would you tell them?

The first thing is management culture. It’s very difficult to become a competitive global financial institution if you don’t have a culture that taps into the energy and innovation of people at all levels in the organization. We like to call that “bottom up.” The culture is important. When you do look overseas and go overseas you have to send the “A” team. But there’s been a previous position with Korean financial institutions of keeping their best people at home and sending the not-so-best people overseas. What the institutions have to realize is that what they think is competitive at home, it’s more competitive overseas. You really need your best people.

The other advice - in fact, the most important advice - is that these institutions really need to decide what their niche is and what things they can do to bring something special to the markets that they go into. Don’t try to do everything. It’s really about doing proper comparative analyses and not just chasing Korean companies overseas.

The other thing I suggest is partnerships - being willing and being prepared to tie up with global financial institutions - which is what we did. We tied up with Shinhan and Kookmin and learnt so much about the market.

What about M&As for financial firms to tap into overseas markets?

M&As are another way to go, but that’s a way that always concerns me because when you acquire a global institution, it’s very easy for your value to be destroyed overnight. I think M&As should proceed with caution. The thing that will make Korean institutions become global will all be about the product, the niche and management.

As for us, 13, 14 years ago, we were largely an Australian investment bank, and if we continued to being an Australian investment bank we would have had only one way to go. And we would lose market share because the Australian market is fully deregulated and all the global investment banks, commercial banks are there. But it turns out we’re still leading in Australia, and that’s because we went international. We didn’t try to be like Goldman Sachs or Morgan Stanley and to try to do everything. Things like natural resources, infrastructure, real estate, commodity trading, things that we really think we had a natural advantage given our heritage as an Australian institution, we used those as our niches in going into other markets.

The past several years have been tough for asset managers and investment companies because of the financial climate. What do you expect for this year?

The United States continues to steadily come back, as you know, and the euro zone has been improving, although the euro zone’s improvement has slightly slowed down now. Also, quite a number of Asian markets we think are important are improving as well, Korea and Hong Kong included. There is a general mood of improvement.

Things that have been disrupting the market over the last few years have really priced in. Tapering, for example, has already been priced in, and we have already experienced the impacts of that. The outlook is generally optimistic, perhaps a little bit of slowing down in China, but not so much. In fact, the structural changes in China are optimistic. The opportunities for industries will be there. But the challenge will be for the financial market to be able to capitalize on the opportunities.

In my view, the era of universal banking and universal financial institutions is finished. It’s going to be all about specialization and about niches, and not trying to do everything for everybody. For those institutions that continue to do what they’ve always done, it’ll be a very rocky path, and, of course, we’ve seen some of them in Korea, with foreigners leaving or downsizing. No particular specialization or niche makes it more difficult as the domestic industry begins to become stronger.