Park to up cooperation with Unesco

Park to up cooperation with Unesco 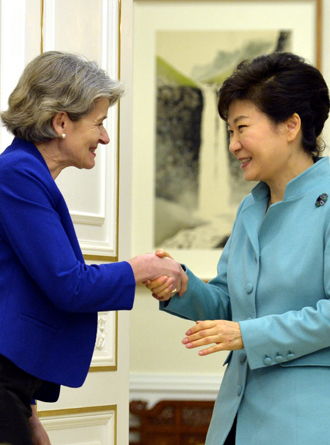 Unesco’s 2015 World Conference on Education will take place in Incheon, and the seventh World Water Forum will be hosted in Daegu.

The education conference will determine international education and development policies for years to come after 2015. Unesco’s International Hydrological Program (IHP) is a major contributor to the water forum.

Bokova visited Seoul to celebrate the 60th anniversary of the Korea National Commission for Unesco. At the event, she received merit from the Korean government in recognition of Unesco’s contributions here.

“Unesco - among various other United Nations organizations - is very much familiar to the Korean people,” said President Park. “When Korea was emerging from the devastations brought on by the war, Unesco offered cultural and educational assistance, and Koreans are very well aware of it and appreciate it.”

President Park expressed a willingness to return the favor by sharing the knowledge the country has accumulated as it progressed.

She promised to expand the trust fund business and participate in setting the Unesco agenda for after 2015. Park also stressed the importance of education.

“The best welfare and growth strategy lies in education,” she said.

Korea is the optimal host for the 2015 World Conference on Education, the Bulgarian director general said in response. She cited the president’s leadership and vision, and the country’s relief efforts in Africa, as primary reasons.

Bokova, the former foreign minister of Bulgaria, noted in yesterday’s meeting that the “creative spirit” - which President Park touched on in her speech at the World Economic Forum last month - coincides with Unesco’s pursuits. The two leaders previously met in Paris in November when Park visited France as a state guest.