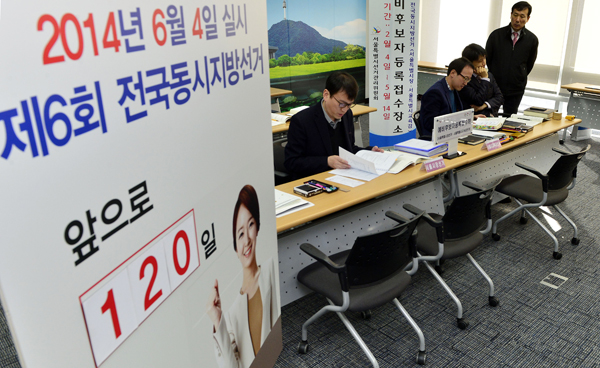 Officials from the Seoul Election Committee yesterday work to receive preliminary registrations of candidates who will run for the local elections, which will take place on June 4 across the nation. [NEWSIS]

Preliminary registration of candidates for local elections on June 4 kicked off yesterday across 17 regions nationwide.

The Republic of Korea National Election Commission said that about 20 people were expected to register as preliminary candidates to run as provincial governors, city mayors or education chiefs.

For incumbent lawmakers to become mayors or governors, they must first withdraw from their current posts. Registration closes May 14.

Preliminary registration for those who wish to run for provincial and district councilor seats begins on March 21, and for heads of the smallest regional unit of counties, on March 23. Local elections take place every four years. Official registration is scheduled for May 15 and May 16, when the list of candidates will be finalized. And those who did not register as preliminary candidates may sign up for official candidacies.

The majority of those seeking to run, however, register as preliminary candidates, after which they are allowed to campaign ahead of the official election period to a limited extent. The official campaign period starts on May 22 and lasts until June 3. Until then, preliminary candidates can establish campaign offices with no more than five staff members and set up signboards and placards to promote their platform. Candidates are allowed to call potential voters, but can send no more than five emails or text messages, as well as one advertisement by the post.

Amid the registrations yesterday, President Park Geun-hye issued a stern warning against corruption in local elections.

“The local elections are the first of the incumbent administration and are supposed to be clean and fair,” she told cabinet members. “I will absolutely not permit [corruption], and I will take grave measures should there be any event in which neutrality during the election is compromised.”

Meanwhile, both the ruling and opposition parties embarked on a full-fledged race for victory. The elections this year will likely to mark the first time in 16 years since Korea saw three parties wage a political battle.

Independent lawmaker and former presidential candidate Ahn Cheol-soo has claimed that his fledgling, yet potentially formidable, new political group will field candidates for all 17 major municipal elections in the upcoming polls. In doing so, they will join the fight between the ruling Saenuri Party and the main opposition Democratic Party.

The tentatively named New Politics Promotion Committee is a preparatory panel for Ahn’s new party set to be launched by March.

However, the possibility that Ahn may join hands with the Democrats remains to be seen. And Ahn’s political faction has so far remained vague about whether it will form a coalition with the main opposition. The independent lawmaker’s close aide and veteran political strategist Yoon Yeo-joon said on Sunday that solidarity with the DP is “a dilemma for us,” and added that the party would “sensitively keep up with how people change their thoughts.”

Kim Gi-hyeon, head of the policy committee of the ruling party, was also critical.

“Should the solidarity between the Democrats and Ahn’s new party be realized, the ‘new politics’ that Representative Ahn is talking about would instantly become ‘old’ - a fraud that ridicules national sovereignty.”

Choi Kyung-hwan, the Saenuri floor leader, said in a party meeting that local polls should be devoted to the election of those candidates dedicated to their respective regions, and should not be “swayed by political logic.”

On the contrary, Jun Byung-hun, the floor leader of the Democrats, expressed hope that Ahn’s new party would become “a colleague that accompanies the Democrats not only in the upcoming local elections but in the change of the regime.”