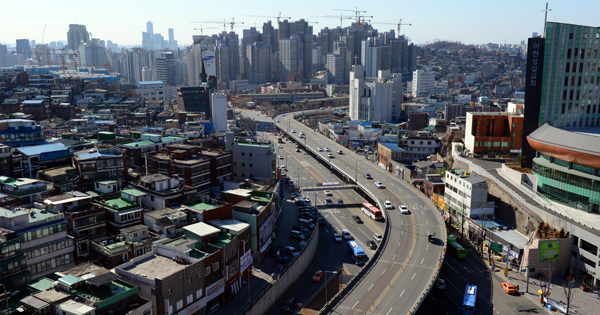 The Seoul city government announced yesterday that Ahyeon Overpass, which was built in 1968, is set to be demolished as a result of severe deterioration and its unsightly appearance. Vehicles will not be allowed to drive on the overpass starting tomorrow once the removal process begins. [NEWS1]

Korea’s first overpass, which was built in 1968, is set to be taken down tomorrow due to its deteriorated state and unsightly appearance.

The figure includes the price of constructing a new bus-only lane to replace the road.

If the city continued to use the road, it would have cost about 8 billion won per year just for repairs, on top of 400 million won in maintenance fees, according to estimates from regular safety tests.

The Seoul Metropolitan Government will block traffic starting at 3 p.m. tomorrow near the road that runs from Ahyeon Station to Chungjeongno Station. Demolition will last until the end of next month.

The new lane is set to be completed by August. In order to reduce inconveniences, construction will take place from 10 p.m. to 6 a.m.

The old overpass symbolized Korea’s rapid modernization, triggered by a huge increase in transportation infrastructure from the 1960s to 1980s. A total of 101 overpasses were built in Seoul during that period.

But these days, many of the roadways built during that time have worn down and are widely considered to be blights on the urban landscape. Since the early 2000s, urban planners have adopted a more sustainable and passenger-friendly approach, taking aesthetics into consideration.

“Policy makers in the 1960s and 1970s preferred to build large overpasses,” said Kim Ki-ho, an urban engineering professor at the University of Seoul. “They are tangible. [The large number of overpasses] shows the speed-oriented, top-down urban planning methods of the old days.”

“Since it took relatively less time with affordable expenses, urban planners usually prefer it over other options,” said Lee Yong-sim, an official in the road construction division at the Seoul Metropolitan Government.

Seoul’s decision to transform Seobu Highway, a main arterial road, into an underground road partly reflects a shift from the past.

The Seoul city government is now considering demolishing other dilapidated overpasses, including the one near Seoul Station. It has already decided to close the Seodaemun Overpass in Seodaemun District.

Acknowledging the overpass’s historical significance, the city government will allow citizens to come and walk along the overpass on Saturday before it is completely demolished.

In recognition, Seoul will also display signs used on the overpass in an upcoming exhibition in May at the Seoul Museum of History titled, “Adieu, Overpass!”

“Although the shift in urban planning has led overpasses to be removed, they certainly have historical value, reflecting Seoul’s transformation from a war-torn city to a high-tech modern metropolis,” said Kim Ji-yeon, an official from the museum.