Lee, Mo keep each other on track in race

Lee, Mo keep each other on track in race 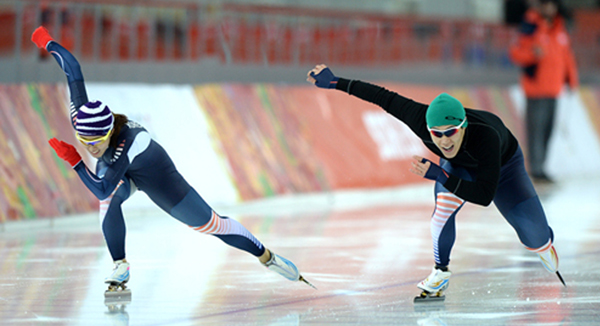 Speed skaters Lee Sang-hwa, left, and Mo Tae-bum race each other on Tuesday during a training session at Adler Arena in Sochi, Russia. [NEWSIS]

On the ice rink at Adler Arena in Sochi, Russia, speed skater Lee Sang-hwa, the defending champion in the women’s 500 meters, stood on the starting line.

But her training partner, who stood right next to her, wasn’t one of her teammates.

Instead, it was Mo Tae-bum, a friend of Lee’s. Mo is also the men’s 500 meters champion and the 2010 Vancouver Olympics 1,000-meter silver medal winner.

Reporters and photographers soon gathered nearby to watch the rare race, which took place local time on Tuesday.

Because it is almost impossible for a female athlete to beat a male world champion, Mo was given a handicap - begin the race four meters (12.2 feet) behind Lee. When Canadian coach Kevin Overland blew the starting whistle, the two took off. Mo, who started the race in the inner lane, won by more than five meters.

After a break, the two resumed their places on the starting line, with Lee in the inner lane this time.

The second race was more competitive than the first, with both skaters crossing the finish line at almost the same time.

They argued for the next few seconds to determine who won, and when Overland declared Lee the winner, she celebrated by raising her arms.

“That was a good race for both of them,” Overland said.

“As there are no competitors for Lee among female skaters, we decided to let them race together. I think this will help Lee, especially in making a better start in a race, because Mo is one of the world’s best skaters in making a quick start.”

After working with Overland, she started improving her results in the initial 100 meters. Her efforts paid off in November’s Speed Skating World Cup, in which she set the world record with a time of 36.36 seconds.

“People always ask me who is my biggest rival, but I think keeping myself in good shape is the most important thing to do,” Lee said. “I don’t listen to slow and sad ballad music ahead of such events because I’m trying to enjoy this event, more than just winning a medal.”

While the skaters were focusing on improving their techniques, Choi Jae-woo, a mogul skier, and Kim Ji-sun, the captain of the women’s curling team, are trying to avoid bad luck and maintain their mental strength.

“I don’t even let my roommate share my mug,” Choi said. “One of the reasons I do that is because I don’t want to get a cold and it also kind of helps me keep focused ahead of such a huge event.”

Because curling games, which take about two and a half hours, demand intense concentration, Kim spends about two hours a day reading a psychotherapy book that helps her improve her concentration.

“As part of so-called image training, I imagine myself standing on the top of the podium to encourage myself,” said Shin Mi-sung, 36, one of Kim’s teammates.

“Our best weapon is teamwork, because we have been playing together for five years,” said Kim, the team captain. “We hope we can give a nice surprise to the nation in the Olympics. We ask them to give us their best support, just like they have been.”