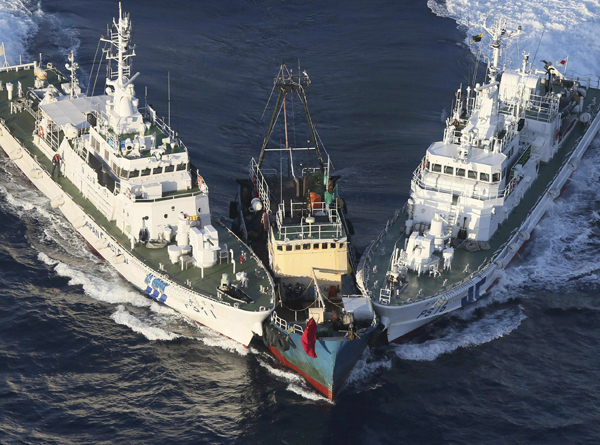 A Chinese boat, center, is surrounded by Japanese Coast Guard patrol boats after some activists on the boat reached Uotsuri Island, one of the islands of Senkaku in Japanese and Diaoyu in Chinese, in the East China Sea on Aug. 15, 2012. [AP/NEWSIS]

Japanese Prime Minister Shinzo Abe hoped to herald his economic reform program at Davos last week. Instead, people zeroed in on another of Abe’s comments: likening tensions between China and Japan today to those between the U.K. and Germany on the eve of World War I.

Abe wasn’t advocating war between Asia’s two biggest economies. His words, however, exposed a problem in Northeast Asia, one with roots in the Second World War, not the first: the lack of multilateral institutions to settle disputes matching those created in western Europe after 1945. Such bodies - including the North Atlantic Treaty Organization and the European Community (later European Union) - have kept the peace in Europe for almost seven decades. In Asia, no such organizations were forged - bringing conflict today, however unintended, within the realm of the possible.

To understand why, one needs to look back at the messy way in which World War II ended in China. In 1945, the postwar settlement planned by the Allies, including the Soviet Union, envisioned the Nationalist China under Chiang Kai-shek as a pillar in Asia. Chiang’s forces had contributed significantly to the war effort against Japan, including the years from 1937-41 before Pearl Harbor, when China fought essentially alone.

Its wartime sacrifices, including some 14 million or more deaths and 100 million or so refugees, made it necessary to acknowledge a major role for China in the postwar order.

Within a year of Japan’s surrender, though, China had dissolved into civil war. The exhaustion and corruption of the Nationalist regime ensured its defeat by Mao Zedong’s communists, who took power in 1949. Meanwhile, Japan had become a Cold War ally of the U.S.

Mao’s decision to take up Joseph Stalin’s challenge and assist North Korea in its attempted invasion of the South isolated China even further from the Western world. Caught up in a sterile debate on “who lost China,” the U.S. refused to recognize the People’s Republic. The chance for China to become a power broker in Asia was lost (Mao’s disastrous economic policies were to blame for this, too). When Japan re-emerged from Allied occupation, it had no partner with whom to consider building a new regional security architecture.

In a remarkable ideological turnaround, there has lately been a partial rehabilitation of Chiang’s image in China, with particular focus on his record of resistance against the Japanese invasion. He took part in the 1943 Cairo Conference, where Franklin Roosevelt and Winston Churchill hinted that after the war, China should reclaim all territories deemed to have been captured by Japanese imperialists. The topic has great relevance to the current Diaoyu-Senkaku islands dispute.

There should be an opportunity here for China to reclaim and use its legacy as the “forgotten ally” of World War II to build bridges with its neighbors. Yet it hasn’t yet managed to do so in a way that those neighbors find persuasive and consistent.

Japan, too, has mishandled opportunities to build a more stable platform for regional relations. Abe has used the initial success of his economic reforms to expand political space for the argument that Japan played a noble, liberating role in Asia before 1945 - an argument that finds few friends in Seoul or Singapore, let alone Beijing.

Refusing to understand why China and other Asian neighbors remain so sensitive about wartime history doesn’t help the Japanese government’s cause at a time when it needs friends: Witness the way that South Korea’s affections have shifted away from Japan toward China in the last year.

Japan and China have both shown they are capable of nuanced diplomacy when it is needed. In 1937, they went to war instead, and the confrontation ultimately led to the destruction of the regimes in both countries. Surely that experience should be incentive enough for them to seek some version of the settlement postwar Asia was always meant to have.

*The author is a professor of the history and politics of modern China at Oxford University. His most recent book is “Forgotten Ally: China’s World War II.”