To everything, there used to be a season

To everything, there used to be a season 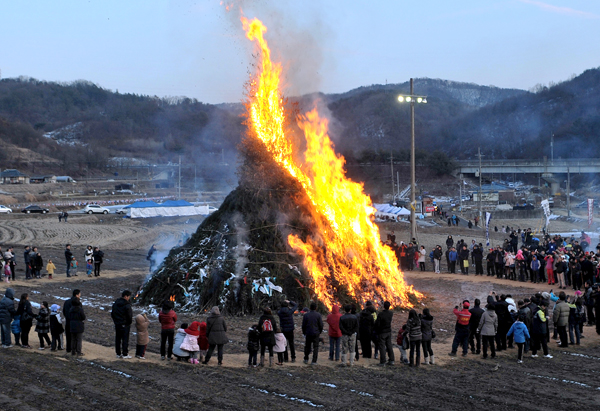 During Daeboreum, the first full moon of the Lunar New Year, people gather to burn wood and wish for a good harvest in the year ahead. [Joongang Ilbo]

Regretting the absence of traditional seasonal customs has been going on for so long in the local news media, it has almost become its own tradition.

Just before the holidays, Gallup Korea released a report analyzing how today’s Koreans spend their Lunar New Year. While many still visit their hometowns, more than half of the respondents said they did not play any kind of folk games with their relatives during the previous year’s Seollal.

The poll of 1,208 people showed that only 16 percent of families played go-stop, a modern game played with Japanese hanafuda cards, down from 42 percent in 2006.

And even go-stop was once blamed for replacing yutnori, a more traditional board game.

The percentage of people not playing any games with family members over Seollal increased 15 percentage points from the 2006 survey.

Families do gather together for the holidays, but instead of playing traditional games, today’s digital nomads are more inclined to play video games on their smartphones with their virtual friends.

By the same token, young people prefer to return to the city as quickly as possible, leaving less time for playing games with their family members.

Many older people and culture experts have regretted this waning of traditions over the years. But are they really disappearing? And should we regret it?

Another point of view is that these changes are natural and that these seasonal customs are just evolving into new forms.

Calendrical rituals are the byproducts of Korea’s ancient agricultural community.

“In an agricultural community, being a mature person meant having expertise in farming,” said Cheon Jin-gi, director of the National Folk Museum of Korea.

To sustain and support the community, people had to pay attention to the changing seasons. Calendrical rituals revolved around the lunar calendar, which explains why Koreans still consider the Lunar New Year to be the real start of the year.

Rituals such as Daeboreum (or “Great Full Moon,” the first full moon of the new lunar year), Dano (the fifth day of the fifth lunar month), Chuseok (the Korean fall harvest festival), Dongji (winter solstice) and Seollal are examples of seasonal customs that Koreans have long appreciated, with roots going back to more than a thousand years.

According to “Samguk Sagi,” published in 1145 and considered to be the oldest written history book of the nation, Koreans kept those traditions even before Korea was united into a single country in 668. In addition, historical documents from the Goryeo Dynasty (918-1392) and Joseon Dynasty (1392-1910) mention how people had different kinds of seasonal rituals.

Such seasonal customs were often related to the cycles of farming.

On Daeboreum, the 15th night of the first month of the lunar calendar, children whirled containers of burning charcoal while older people burned the dry grass that grew on the rice fields, killing harmful insects and fertilizing the soil.

Ipchun signaled the start of the farming season, while Chuseok was a time when newly harvested grains were offered to the gods of heaven and earth.

In the olden days, young men had to lift heavy stones to prove that they were capable of supporting a family. The community would then celebrate and recognize their growth.

A common Korean idiom for “growing up” literally means “to become aware of the changing seasons,” noted Cheon, a sign of how important the seasons were to society then. So the various rituals associated with the seasons helped people to better understand the laws of nature.

However, today’s 19-year-olds no longer need to know nature or lift stones to enter into adulthood. And local communities, if they exist at all anymore, no longer care about the coming-of-age ceremonies for younger people.

So what contributed to the loss of traditions? Clearly Korea’s rapid urbanization was the key factor behind the change. In the 1970s, the Korean authorities equated modernization with Westernization and suppressed many traditions. Because of government propaganda, many Koreans started to prioritize Western values over Korean traditions. Such social pressures, especially from the cities, overcame the forces of tradition in the countryside.

According to a 2009 research paper by Kim Man-tae, a professor at Dongbang Graduate University, the majority of elementary school students in 1985 already said they were not familiar with some of the seasonal rituals, like Dongji, Bok Nal (the hottest days of the summer) and Dano. Considering that the survey was done almost 30 years ago, today’s young people likely have grown even further out of touch with those rituals.

But are seasonal customs vanishing completely from Korea? Kim Myung-ja, professor emeritus in the department of folklore at Andong National University, disagrees.

Instead, Kim feels that the old rituals from ancient, agricultural times in Korea are now evolving into different versions for the modern age, more suitable for industrialization and globalization.

For example, in the olden days, Koreans celebrated Samjit Nal (the third day of the third lunar calendar) by giving thanks to the gods for the arrival of spring. Children played tuho, a game consisting of throwing arrows into a vase, while wives prepared rice cakes adorned with wildflowers from the field.

Today, according to the professor, such traditions have transformed in urban areas into spring picnics. Instead of plucking wildflowers, people go to Yunjung road in Yeouido, western Seoul, to enjoy the cherry trees in the spring.

At the end of the year, many Koreans visit Jeongdongjin, a coastal town in Gangwon, to watch the sun rise and wish for good luck in the coming year. Professor Kim believes that the Jeongdongjin visit is a modern adaptation of how the full moon used to be celebrated during the night of Daeboreum.

Many Korean folklore experts believe that Servants’ Day from the olden times merely transformed into today’s Labor Day on May 1.

The main functions that seasonal customs served were relaxation, entertainment and community bonding. Some had religious aspects as well. However, today’s Koreans are eager to rest throughout the holidays, and people obsess too much about the amount of days they can get off work. The values of community and togetherness are vanishing.

Many seasonal customs do survive in the form of regional festivals. But being so much smaller than national holidays, these customs have little hope of surviving.

Practicing seasonal customs throughout the year involved anticipation. People had to wait for the right time to harvest ripe fruits and grains. Through that journey, Koreans learned the value of patience. Only by the time grains were ready to be harvested could people heartily appreciate the bounty given by the gods.

Throughout recent decades, Koreans have unwittingly been removed from their roots. Economic growth and technological advances have certainly made life more affluent than ever; yet even in such unprecedented abundance, the key values that supported Korean communities are nowhere to be found.

Without preserving Korea’s cultural heritage, the unprecedented prosperity Koreans have achieved will be an empty success. Now, the torch has been passed to the current generation - Koreans must decide whether to carry on those traditions, even in transformed versions, and whether to appreciate traditional culture. Thirty years from now, what will be left of Korean culture?

This year, Valentine’s Day coincides with Daeboreum. So why not combine the two festivities? Why not whirl burning charcoal in the countryside with your date, or combine Valentine’s Day chocolates with some japgokbab, or five-grain rice?

Korean traditions can be balanced with the changing times. So let’s hope a revived interest in Korea’s customs will help preserve Korea’s precious cultural heritage.

The Asan Institute for Policy Studies contributed to this article.