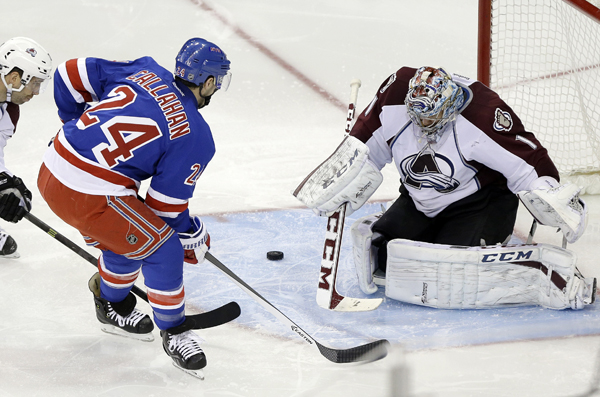 With Callahan’s future with the Rangers unsettled just before he heads to the Sochi Olympics, he staked New York to a 2-0 lead with goals 3:19 apart.

Defenseman Anton Stralman added his first of the season in the second period, and Derick Brassard and Brad Richards scored in the third - with an assist from Callahan - in the Rangers’ 10th win in 13 games.

After Callahan was stopped with a chance at a hat trick, Brassard made it 4-1 at 1:58. Richards finished the scoring with 1:36 left.

Gabriel Landeskog, Lundqvist’s teammate with Sweden in the Olympics, scored in the second, and Russian Olympian Semyon Varlamov stopped 38 shots, but the Avalanche had a four-game winning streak snapped.

For a while it appeared the Rangers would have nothing to show for their dominant first period. The shots were 16-2 in New York’s favor, but the game was still scoreless. Callahan took care of that in a hurry.

Carl Hagelin chipped the puck away from defenseman Jan Hejda in the Rangers zone and raced up the left wing. Hagelin sent a crisp pass across the Avalanche zone to Callahan, who took it at the bottom of the right circle, shifted to his backhand, and slid a shot in with 5:44 left in the first.

The Rangers continued their shot barrage - and gave up two - before Callahan connected again.

Richards made a pass from the right circle into the slot to Callahan for a quick one-timer past Varlamov. Callahan raised both arms over his head and then dropped them to his waist as he let out an emphatic yell to celebrate his 11th goal of the season with 2:25 remaining in the frame.

New York finished the period with a 20-4 edge in shots.

Colorado briefly cut the deficit in half when Landeskog turned a face-off win in the Rangers end into his 17th goal. Lundqvist had kept the Avalanche at bay with a save on a hard shot by Nathan MacKinnon during a power play. But after the face-off, MacKinnon sent a pass from below the goal line out front to Landeskog for the goal at 6:37.

The Avalanche were down 31-11 in shots but trailed only 2-1. Yet 53 seconds later, the Rangers went back in front by two.

Stralman took a pass from Mats Zuccarello and wristed a shot from just inside the blue line through traffic and past Varlamov for his first goal in 60 games, dating to April 19, 2013.

Colorado had a great opportunity to get back into the game late in the second when back-to-back penalties gave the Avalanche a two-man advantage for 1:50. They spent plenty of time with the puck in the Rangers’ end, but put very few shots on Lundqvist. When they did, he turned them aside.

Colorado mustered three shots on that double penalty and 14 overall in the second period but still faced a two-goal deficit entering the third.