LG U+ puts 3 frequency bands to use for its LTE

LG U+ puts 3 frequency bands to use for its LTE 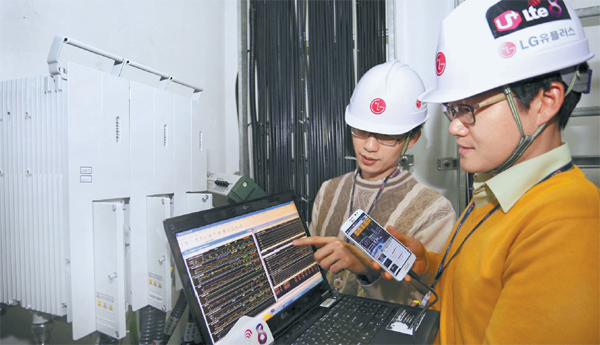 LG U+ announced yesterday that it has launched the nation’s first three-bandwidth multicarrier service in Seoul and the greater Seoul areas. The technology enhances data traffic and voice quality by splitting data flow to three LTE bandwidths. Provided by the company

Mobile carrier LG U+ is taking on its two larger competitors, SK Telecom and KT, in terms of LTE service quality, by making use of its new 2.6 gigahertz broad bandwidth, which the company acquired at a government auction last August.

The smallest Korean telecom yesterday said it has established the nation’s first 3-bandwidth multicarrier that automatically distributes voice and data traffic, improving the quality of its services.

The service incorporates three frequency bandwidths - an 800 megahertz band, a 2.6 gigahertz broadband and a 2.1 gigahertz band - preventing data traffic from being concentrated on one frequency. The service is already available in Seoul and some greater Seoul areas. It will be available in other metropolitan cities in March and nationwide in July.

All three mobile carriers have sped up their long-term evolution (LTE) services through the two-bandwidth multicarrier service. When data traffic peaks in one band, the multicarrier technology enables smart devices to automatically detect and connect to the other band. Through this method, regular LTE services offer data speed of up to 100 megabits per second. LTE Advanced (LTE-A) and broadband LTE services, meanwhile, will offer speeds of up to 150 megabits per second.

Unlike existing multicarrier technology, which only enhances data traffic, LG’s new technology boosts the quality of both data and voice calls. The company assigned more optimal frequency bandwidth to each service.

Currently, this service is only available on certain LTE smartphones that are compatible with the 2.6 gigahertz broadband. The carrier plans to make the service available to all smartphones released in the future.

Last month LG U+ also unveiled the world’s first carrier aggregation (CA) technology, which utilizes three frequency bandwidths. Unlike the multicarrier technology, the CA technology eases data traffic by combining three smaller bandwidths into one large bandwidth. The technology will double data speed to up to 300 megabits per second.

“The three-band multicarrier technology boosts the average speed,” said Choi Taek-jin, vice president of the LG U+ SD technology and strategy department. “We also hope to offer the fastest LTE service among three carriers by commercializing the CA technology in the later half of this year.”