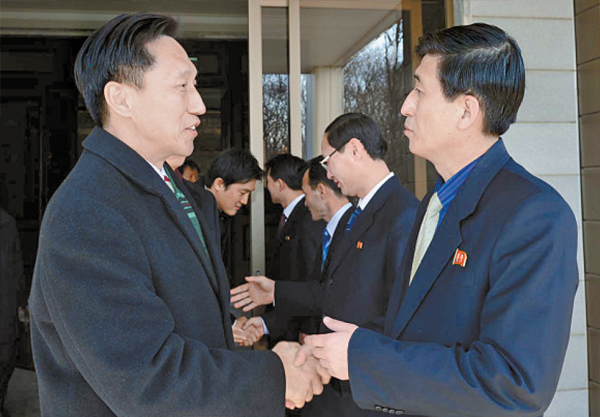 North and South Korea yesterday agreed to hold the reunions for families separated during the 1950-53 Korean War from Feb. 20 to Feb. 25, three days later than the South had originally proposed.

Three Red Cross officials from each Korea finalized plans in a meeting at Tongilgak, in the northern part of Panmunjom on the inter-Korean border, during which representatives held two general meetings and three brief talks to finalize the dates.

The meeting did not, however, touch upon the long-suspended resumption of the inter-Korean tourism program at the mountain. The Red Cross, a humanitarian institution, has carried out reunions in the past.

The Ministry of Unification said the reunions will be held at Mount Kumgang, a scenic tourist resort in North Korea - as with previous reunions - where 100 people from each side will meet with their respective family members.

Families and officials from South Korea will stay at the Mount Kumgang Hotel and the Oekumgang Hotel, the only accommodations available in the resort area.

Candidates will come from the list compiled in September last year, before North Korea abruptly called off the reunions just days in advance. A guardian will accompany elderly visitors if necessary, under the accord made yesterday.

A group of South Korean officials will be dispatched to North Korea tomorrow to check the heating facilities and electricity, and an additional batch of officials will be sent to Mount Kumgang five days prior to the reunions.

“We have been making concerted efforts to come up with practical solutions to the separated family issue,” the ministry said in a statement. “We hope the agreement will proceed according to plan so that the reunions may ease the pain and suffering of those who have long been separated from their families.”

South Korean Red Cross officials stressed in the meeting that it was crucial for the reunions to be carried out as planned, and North Korea agreed that it would not unilaterally cancel the event again.

South Korean officials were initially concerned that the North would take issue with the South’s planned joint military drills with the United States, which are scheduled to start Feb. 24. However, out of step with recent rhetoric, the North did not address the issue.

Pyongyang has tended to avoid any type of inter-Korean interaction when the South has conducted its military activities.

“Let’s give pleasant news to those separated families who have so far been longing for the reunions based on the basic spirit of the Red Cross,” said Lee Duk-haeng, an official with the organization. “Let’s make an effort together to make the reunions a chance for both Koreas to build trust and cooperate further.”

“Even if today marks the onset of spring [under the 24 traditional seasonal divisions], the weather is pretty cold. I think the Red Cross should take the lead in bringing in a warm spring breeze for improved inter-Korean ties this year.”

Talks of family reunions were triggered after President Park Geun-hye first proposed them during a New Year’s press conference on Jan. 6. Pyongyang said on Jan. 24 that the South could set the dates for reunions after the weather got warmer following the Lunar New Year holiday but remained silent for a week even after Seoul agreed to the proposal.

On Monday, North Korean representatives offered to meet with South Korean officials for working-level preparations on the upcoming family reunions.