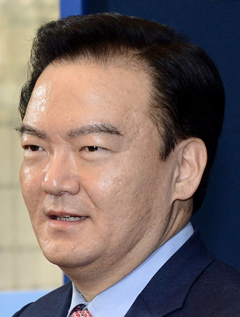 The Blue House yesterday appointed Min Kyung-wook, chief of the culture desk at the Korean Broadcasting System (KBS), as the new presidential spokesman to fill the vacuum left after his predecessor, Kim Haing, stepped down more than a month ago on Dec. 31.

A graduate of Yonsei University, Min joined KBS in 1991 and worked as the network’s Washington correspondent from 2004 until 2007.

From early 2011 until October of last year, he served as an anchor on KBS’s main news show.

“Given that he has been active as a broadcast journalist and as an anchor for a long time, Min is considered an appropriate choice to deliver the [Blue House’s] state management philosophy to the people,” said Lee Jung-hyun, a senior presidential secretary for public affairs, in a briefing, in which he introduced Min to Blue House press members.

Min said in the briefing that he had not talked with President Park Geun-hye personally, but he once interviewed her when she was running as the Saenuri Party’s presidential candidate.

Min is the third spokesman to be appointed to the position. The two former presidential spokespersons appointed by Park left their jobs less than a year after she took office on Feb. 25.

The first, Yoon Chang-jung, was fired after being accused of sexually assaulting an intern during the president’s first trip to the United States in May.

Kim tendered her resignation on Dec. 31, saying that she needed time to “recharge” after serving as a spokeswoman in the first year of President Park’s term.?