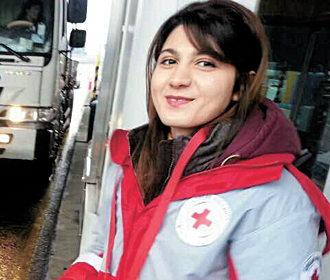 Rahil Ahmadova, a 25-year-old Azerbaijani woman who came to Korea for her studies, conducts a fund-raising campaign at a tollgate on an expressway in Korea. Provided by Rahil Ahmadova

It’s been seven years since Rahil Ahmadova, a 25-year-old Azerbaijani woman, came to Korea for her studies. She receives some 200,000 won ($184) per month from her home country to help with her expenses, but that is certainly not enough money to get by in Korea. But still Ahmadova has managed to donate regularly to the underprivileged since 2011, and teaches English for free at a local welfare center.

While Ahmadova’s actions may be seen extraordinary, to her, she’s just returning the favor. That’s because after her family fled to a refugee camp in 1993, due to the fighting between Azerbaijan and Armenia, they received aid from Korea.

“I received bread, milk and clothes, all donated by a Korean,” she said.

“So when the Korean government invited me to study in Korea, the offer felt like another gift that I received from Korea.”

After finishing her undergraduate degree at Keimyung University in Daegu, Ahmadova now studies marketing and business administration at the graduate school of Kyungpook National University in North Gyeongsang.

When she attended Keimyung University in 2009, she was looking for ways to get engaged in volunteering. A worker at the school told her about a welfare center that assists children from modest backgrounds.

“I asked the school if there was any place that I could provide some help,” she said.

Ahmadova teaches students there three times a week for two hours each day.

In 2010, she decided to step up her charitable work, and asked the Red Cross Korea if there was something she could do.

The organization invited her to volunteer as a counsellor for migrant workers and their families, as well as bullied youth. As a member of the Red Cross, she also participates in a variety of charitable activities provided by the organization.

Last month, she was involved in a fund-raising event in which volunteers go to expressway tollgates and encourage people to donate to the poor. In the cold of winter, it is extremely challenging.

She says that five people from Mongolia and China have already asked to join the group.

“When I get a job after graduation, I will donate 10 percent of my salary so that I can help people in Korea.”