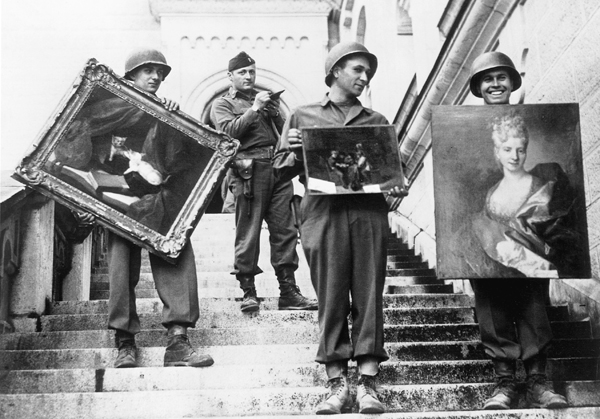 This photo provided by The Monuments Men Foundation for the Preservation of Art of Dallas shows James Rorimer, with notepad, as he supervises American GI’s carrying paintings down the steps of a castle in Neuschwanstein, Germany, in May 1945. [AP/NEWSIS]

DALLAS - From a fairy-tale-inspiring castle in the Bavarian Alps to a serene sculpture of Mary and Jesus by Michelangelo tucked away in a Belgian church, sites and works of art across Europe can give travelers a glimpse of the heroic work done by the group depicted in the new movie “The Monuments Men.” The film will be released in the United States today and in Korea on Feb. 27.

The group’s mission was to save cultural treasures during World War II. And just like the group’s previously unsung accomplishments, many of the places and objects they saved have been “hidden in plain sight” for decades, said Robert Edsel, the Dallas-based author of the book “The Monuments Men,” which inspired the movie starring George Clooney, Matt Damon and others.

Edsel talked about a few of the many places and artworks in Europe tied to the work of the 350 men and women from Allied countries, most of them already established as architects, artists, curators and museum directors when they reported for duty. Eventually, they returned more than five million cultural items stolen by the Nazis as part of a systematic looting operation.

A Michelangelo in a salt mine

Visitors to the canal-lined, storybook town of Bruges, Belgium, may look in awe at Michelangelo’s marble sculpture “Madonna and Child” in the Church of Our Lady, but few know of its harrowing wartime journey. Taken from the church by German officers in 1944, the sculpture was eventually discovered by Monuments Men on a dirty mattress in a salt mine near Altaussee in Austria.

In the town of Ghent, not far from Bruges, visitors at Saint Bavo Cathedral can gaze at another work that was discovered by Monuments Men at the Altaussee mine: the Ghent Altarpiece. Made of panels painted by Jan van Eyck in 1432, the famous work of art was taken by the Belgians to France in 1940 for safekeeping. But in 1942 it was taken by the Germans.

Tourists can also visit the Altaussee salt mine where those works - along with 6,600 paintings, 140 sculptures and other pieces - filled more than 100 tunnels. The works stored in the Austrian mine about 45 minutes from Salzburg housed treasures Adolf Hitler wanted to one day fill his planned museum in Linz, Austria.

A Parisian Museum and a Vermeer

When the Nazis took over the Jeu de Paume museum in Paris, making it the headquarters of their looting operation, French art expert Rose Valland was allowed to stay. But Valland, who unbeknownst to the Nazis spoke German, managed to keep track of where the artworks - most stolen from Jewish families in France - were being sent. She passed that information along to Monuments Man James Rorimer after the liberation of Paris, directing him to Germany’s Neuschwanstein Castle. Today, a small plaque on the southwest corner of the Jeu de Paume, located near the Place de la Concorde, recognizes her bravery.

To see a work of art with a history that encapsulates the Nazi looting machine, Edsel says, gaze upon Jan Vermeer’s painting “The Astronomer” at the Louvre.

“That one picture is stolen from the Rothschilds, goes to the Jeu de Paume. It’s selected for Hitler’s museum .?.?. It ends up in the salt mine at Altaussee, found by the Monuments officers, returned with all these other things to France, returned to the Rothschilds, donated to the Louvre,” he said.

Visitors flock to tour “Mad” King Ludwig’s Neuschwanstein Castle, nestled in Germany’s soaring Bavarian Alps with dramatic turrets rising into the sky. But during the war, the castle was the Nazi’s hideaway for about 21,000 items stolen from French collectors and records of the looting.

Monuments Man John Davis Skilton arrived in the German town of Wurzburg in hopes of saving the Giovanni Battista Tiepolo’s ceiling fresco “Allegory of the Planets and Continents.” The fresco in the Residenz palace dating back to the 1750s was in peril: The roof above the fresco ceiling burned off during Allied bombings, leaving it exposed to the elements.

Edsel said Skilton set to figuring out how to get a roof built over the fresco as soon as possible. “He sees how precarious it is, so he finds lumber, which was no easy feat,” said Edsel. “When you go walk through the palace Residenz, in the last room that you’re in, there’s a small shrine to John Skilton.”

The bridges of Florence

In Italy, Florence’s bridges today offer a look at cultural treasures that didn’t survive the war. Except for the Ponte Vecchio - the city’s famous covered bridge - other bridges over the Arno were destroyed by the Nazis as they made their retreat out of Italy in 1944. Pictures from the war show people walking across the rubble that was once the bridges. Edsel says the now rebuilt bridges are “part of the altered legacy that we live with today.”

Monuments Man Deane Keller’s work to restore the heavily damaged Camposanto building in Pisa meant so much to him that he was buried there after his 1992 death. During the war, frescos in the ancient cemetery near the city’s Leaning Tower were damaged from a fire during a fight for the city. Keller worked with a team to save what they could. AP