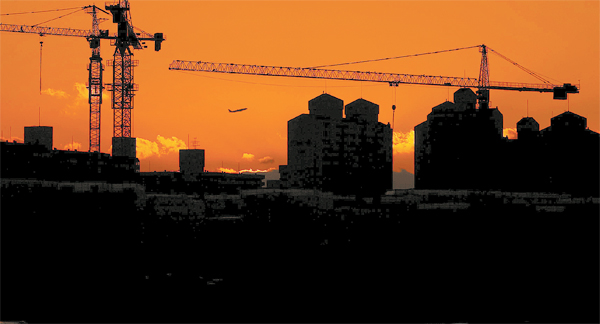 Korean construction companies reported sharp drops in profits last year, but analysts are cautiously predicting the struggling industry could see a better 2014 because most deliberately took “big bath” losses last year to get them off their books.

Major Korean builders reported significant plunges in operating profits, with Hyundai Engineering and Construction being the exception. Despite a slump in the fourth quarter of 2013, the nation’s largest builder, which is under Hyundai Motor Group, reported its 2013 operating profit increased 4.3 percent year-on-year to 792.9 billion won ($735 million), while sales increased 4.6 percent to 13.93 trillion won.

Some construction companies went into the red. Korea’s third-largest builder, Daewoo E&C, said it had an operating loss of 119.5 billion won in 2013, while Hyundai Development Company (HDC) lost 147.9 billion won.

Other major builders that are not listed on the stock market - Lotte E&C, Posco E&C, SK E&C and Hanwha E&C - will release their earnings next month, but industry insiders suspect the situation for those companies will be similar.

This accounting technique forces the company to report a poor performance that will make future earnings look better. It is usually implemented after an especially bad year in which the company wouldn’t have had good results anyway. It is sometimes used when a new CEO wants to blame the company’s unsatisfactory performance on his predecessor and take credit for an improvement the following year.

Daelim Industrial reported 535.9 billion won in expenses in the fourth quarter after calculating possible losses from construction projects in Saudi Arabia and Kuwait as labor and equipment costs rise. Although the builder receives revenue from the project in each construction phase, it decided to write off its expenses in advance.

HDC also reported that it applied expected future losses on construction projects in Daegu and Ulsan, while Daewoo E&C is known to be applying more than 1 trillion won in possible losses in the fourth quarter, according to Kang Seung-min, an analyst at NH Investment and Securities. 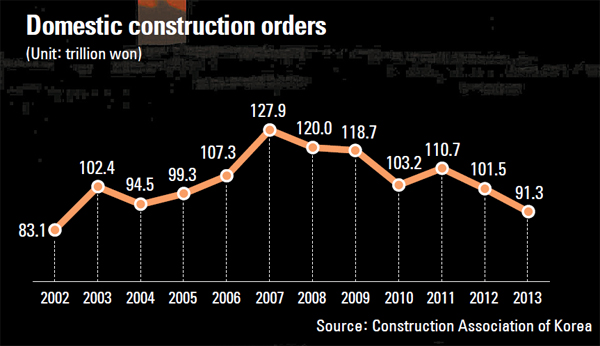 Industry insiders said more builders will try to off-load possible losses coming from project financing (PF) loans backing domestic orders. According to a recent report from the Korea Investors Service, local builders’ possible losses from PF amount to more than 3.7 trillion won as of the third quarter of 2013.

The Korean stock market is welcoming construction companies’ clearing of losses on their balance sheets.

“Because of major builders’ conservative accounting last year, the market seems to have more expectations of a normalization of their business,” said Kim Hyun-gun, an analyst at Meritz Securities. “As they continue to clear problems in unprofitable construction projects in the first quarter, there could be a turnaround from the second half of this year.”

Analysts say construction stocks are rising because of improved prospects for future earnings and the idea that companies will be more cautious about bidding for overseas construction projects in the future.

“We are not going to make the same mistake we did in the past,” said an employee at a major construction company. “These days, instead of entering a bidding on their own, more builders are forming a consortium with other companies to reduce risks in overseas projects.”

Meanwhile, it seems major builders need to go overseas because the value of domestic orders is declining. According to data from the Construction Association of Korea (CAK), the total value of construction orders in 2013 was only 91.3 trillion won, the lowest figure since 2002’s 83.1 trillion won. A drop in orders from the private sector was the main culprit.

“2013 is the year the construction industry doesn’t even want to remember,” the CAK said in a release. “Although a positive atmosphere looms over the housing market at the beginning of this year, we have to see whether it will continue throughout. We hope this year will be a turning point for the industry both in quantity and quality.”