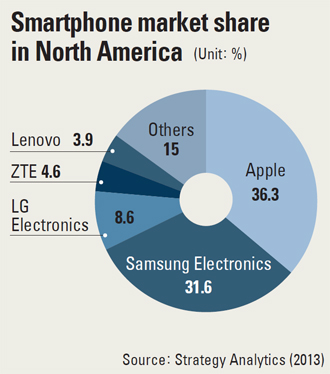 According to Strategy Analytics, a U.S.-based market research firm, Samsung Electronics sold 44 million smartphones in North America in 2013, accounting for 31.6 percent of the total share.

Strategy Analytics data showed that Apple sold 50.7 million smartphones in 2013, comprising 36.3 percent of the total market, down 1.3 percentage points from 2012.

The data means the gap between Samsung and Apple narrowed to 4.7 percentage points last year, from 11 percentage points in 2012. Industry insiders widely believe this year could be the year Samsung overtakes Apple as the top smartphone seller in North America.

Samsung and Apple have been rivals in the smartphone industry with their respective Galaxy and iPhone devices. While the two-way competition is expected to continue throughout the year, there are also other players joining the industry like Lenovo, a Chinese handset maker which recently acquired Google’s Motorola. ZTE is another China-based smartphone maker and had a 4.6 percent market share last year.

“We plan to respond actively to market demand [in North America] by introducing diverse new products that meet consumer demand,” said an official at Samsung Electronics. “Also, we plan to expand our premium product lineup.”

Among other Korean smartphone makers, LG Electronics accounted for 8.6 percent of the North America market last year, selling 12 million phones and placing third in the ranking.