After howler on oil spill, minister is sent packing

After howler on oil spill, minister is sent packing 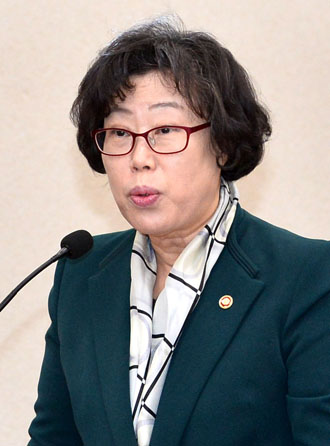 The minister of oceans and fisheries was removed from her post yesterday after she made remarks that didn’t go down well with the public.

Minister Yoon Jin-sook provoked a public backlash when she made unsympathetic comments in the wake of an oil spill at a southern port near Yeosu, South Jeolla.

Yoon said that oil company GS Caltex, which owns the pipeline that leaked the oil after a docking accident, was “the No. 1 victim of the leak,” while residents who lived near the affected areas were only secondary victims.

Yoon made the remarks during a meeting with lawmakers in Seoul that was held to discuss ways of containing the slick.

Yoon, a former researcher at a fisheries research institute, stirred controversy during her confirmation hearing last year when she occasionally burst into laughter during some serious questions.

She was accused by the opposition party of being unqualified for the job.

“President Park Geun-hye has warned that she [Yoon] should be more careful with her words and attitude,” said the prime minister. “I regret that she continued to cause trouble.”

Min said Yoon has not yet expressed her opinion on her dismissal.

The ruling Saenuri Party said it approved of the sacking.

“It is appropriate for the government to dismiss Yoon because she made inappropriate remarks and disappointed the public,” the party said in a statement.