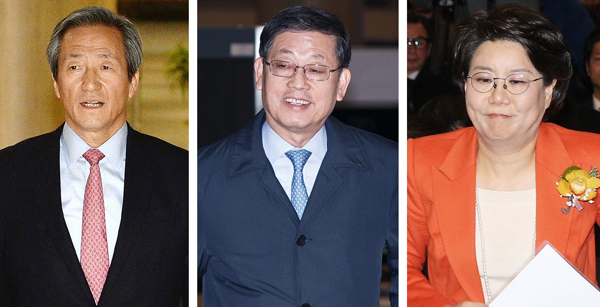 The ruling Saenuri Party is set to field three political heavyweights for the June local elections to compete against one another in the Seoul mayoral race, the most-watched matchup in the polls.

Representative Chung Mong-joon, a former presidential candidate; Kim Hwang-sik, the former prime minister; and Representative Lee Hye-hoon, supreme council member of the Saenuri Party, will campaign against incumbent Mayor Park Won-soon of the opposition Democratic Party, who declared he would run for re-election.

Chung, a seventh-term lawmaker, hinted in a one-on-one meeting with Saenuri Chairman Hwang Woo-yea on Wednesday that he is seriously debating competing for Seoul mayor - a post considered to be a step toward presidency.

“I will make a decision if I reach the conclusion that I can do better than the others, including current Mayor Park Won-soon, and can do something [the mayor] hasn’t,” he said.

His massive stock ownership in Hyundai Heavy Industries, the nation’s biggest shipbuilder, has been considered by some as a major stumbling block to his candidacy, though Chung told reporters on Wednesday that there won’t be any “institutional difficulty” - suggesting that he had already consulted with experts about what to do in case of his election. His shares are valued at an estimated 1.7 trillion won ($1.5 billion), making him the No. 1 shareholder.

Under the Public Service Ethics Act, individuals who hold top government posts including the president are required to sell all of the shares that relate to their duties. Chung would be required to sell those shares in the event he is elected president.

The seventh-term lawmaker is the sixth son of Hyundai founder Chung Ju-young, who also challenged Kim Young-sam and Kim Dae-jung for the presidency in 1992.

The Busan native became the Hyundai Heavy Industries chairman in 1987 but hasn’t participated in management since 2002. He ran for the presidency in that year but later formed a coalition with candidate Roh Moo-hyun to swing voters away from conservative Grand National Party candidate Lee Hoi-chang. Roh ultimately became the president.

Chung again tried to run for the presidency by registering himself as a preliminary presidential candidate - the first among them - but had to postpone those plans once again when the ruling party threw its support behind Park Geun-hye.

Kim is the latest political heavyweight to join the battle. In search of strong candidates to challenge Mayor Park, Saenuri executives attempted to persuade Kim on various occasions to run in the race. Choi Kyung-hwan, the floor leader of the party, suggested during the Lunar New Year holiday that the former prime minister run for the mayoral post. Kim will likely make up his mind before his scheduled departure next Tuesday to the United States.

Kim has more than three decades of experience as a judge. He served as Supreme Court justice from 2005 to 2008 and chairman of the Board of Audit and Inspection from 2008 until 2010, when he was appointed as prime minister under the Lee Myung-bak administration.

Kim, originally from Jangseong County, South Jeolla, is considered to be an asset, and the Saenuri believes he could contribute to attracting voters from the region, conventionally a Democratic stronghold.

Lee, a relatively lesser-known politician, already made her run official last month at her book publishing ceremony, where she stated that she would hold a ceremony declaring her candidacy on Tuesday.

Born in Masan, South Gyeongsang, the second-term lawmaker earned an economics degree from Seoul National University and a doctoral degree in economics from the University of California-Los Angeles.