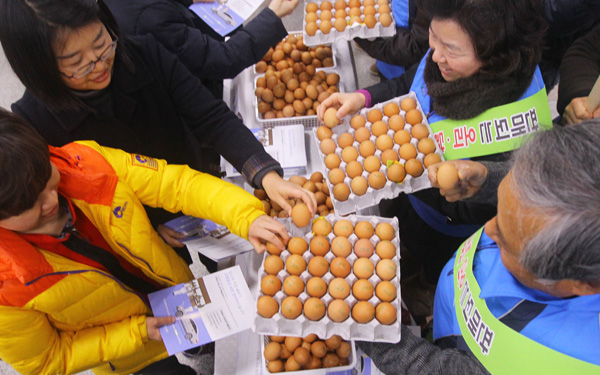 Officials from the Agricultural Research and Extension Services in Gyeonggi hand out eggs to residents yesterday at Suwon Station to encourage the consumption of eggs, chicken and duck meat. Since avian influenza broke out, poultry farms have suffered from a decrease in demand. [NEWSIS]

A 53-year-old poultry farmer, identified only by his surname Bong, committed suicide, the Gimje Police Precinct said yesterday, an action they believe was brought on by the financial losses he incurred after avian influenza (AI) hit North Jeolla.

Bong leased and operated a poultry farm, police added, raising about 35,000 native Korean chickens, though he was only able to sell about 18,000 of them once the demand for chicken drastically declined after the bird flu broke out in January. The daily cost of feed for the remaining animals, at 2 million won ($1,855), was also reportedly a financial strain for Bong, officials said. The outbreak of H5N8 has taken a heavy toll on local farmers and many have since then been struck by financial hardship.

But while farmers like Bong suffered from a decrease in demand, others have been affected by government-implemented measures in the wake of AI, which prohibit them from selling their chickens and ducks.

“I stayed up all night worrying,” said 58-year-old Gil Deok-jin, who breeds about 110,000 chickens in Jeongeup, North Jeolla, on Wednesday.

His farm lies a little more than two kilometers (1.2 miles) from the duck farm in Yeongwon-myeon, Jeongeup, where bird flu broke out on Jan. 26. Gil’s farm was prohibited from selling his chickens in the aftermath.

As a preventive measure, authorities have designated a 500-meter radius around any farm infected by the highly pathogenic AI as a contaminated area, and the birds raised within that radius must be culled to stop the spread of the disease. Farms outside 500 meters but within a three-kilometer radius are usually exempt from such measures, though farmers may not buy or sell poultry.

Native Korean chickens are usually brought to market after about 63 days once they weigh about 2.2 kilograms (4.8 pounds) and have had time to grow. The chickens at Gil’s farm, which he is not able to sell, are currently 75 days old and weigh about 2.8 kilograms.

Medical aid for the poultry has also compounded the problem. According to Gil, it is usual to see four or five chickens die in a day - and about 200 chickens have died over the last three days. Most of the dead chickens showed symptoms of enteritis, or inflammation of the small intestine usually caused by the consumption of pathogenic agents, but the city government has remained unresponsive to his repeated requests for medical assistance.

Making matters worse, Gil is spending about 10 million won on feed every day. Since he was banned from selling his chickens on Jan. 26, his expenses have totaled more than 100 million won, a sum that is only expected to grow as his older chickens consume more food.

“The chickens sell at about 3,000 won per kilogram, but the old chickens will only cost a quarter [of that] even if I bring them to the market right now,” Gill said. “I would rather cull them because at least the government would compensate a certain amount of the price then.”

It has been 22 days since officials first reported on Jan. 16 an outbreak of AI, which they suspected was a highly pathological strain. But owners of poultry farms between the radius of 500 meters and three kilometers have also been dealt an economic blow.

There are currently 19 farms in North Jeolla that are prohibited from buying or selling poultry, with the number of chickens and ducks totaling approximately 670,000. Under the embargo, the government is only providing 14 million won in aid per farmer.

“The monetary support for the farmers [who cannot sell or buy livestock] is too little,” said Gang Gu-hyeong, a director of the Korea Duck Association. “The government should consider providing [the farmers who are banned from buying or selling livestock] with funds similar to those given to the AI-infected farms, and allowing them to pay it back later.”