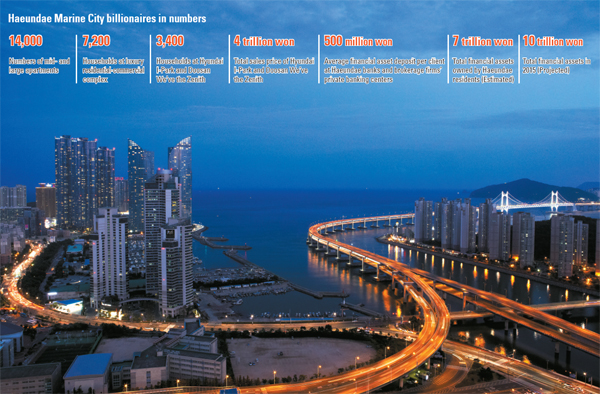 Haeundae Marine City is Busan’s new luxury neighborhood, where super-tall apartment complexes are not far from premium brand stores. Located near Haeundae Beach and Gwangan Bridge, the area is where tourism, shopping, leisure activities and investments all take place. By Daniel Park

In mid-December, Shinsegae Centum City in Busan’s Haeundae District was registered in the Guinness World Records as the world’s largest department store with a total floor area of 293,909 square meters (3.2 million square feet).

As soon as the shopping mall opened in the spring 2009, Centum City became Busan’s must-visit landmark, shifting the city’s main business district from Seomyeon to Haeundae. Shoppers from nearby cities, including Ulsan, Daegu and Geoje naturally flock to the place thanks to its extensive premium brand collection. So does Busan’s middle class.

The range of luxury brands got even wider after the mall renewed the masterpiece and men’s sections in March. Luxury goods account for about 30 percent of Centum City’s total sales. It recorded the second-highest luxury goods sales among all Shinsegae branches, with 824 billion won ($767 million) in 2012 and a projected 900 billion won for last year. The branch aims to become the very first regional branch to mark 1 trillion won in sales.

Ms. Choi, a 43-year-old Haeundae resident, praised Centum City as a place that allows nearby residents to stay up-to-date with luxury trends.

“I visited this mall’s luxury watch fair to purchase a premium watch in October,” she said. “I was very surprised at the crowd of people forming a long line even before the mall opened.”

Porsche opened its first showroom and maintenance center outside of Seoul in this district in 2007. It is a stronghold to target potential clients in Busan and the South Gyeongsang area.

“Our showroom is not that busy with visitors, but most of them actually buy a car,” a Porsche employee bragged.

Other foreign carmakers are also in Haeundae, including BMW, Mercedes-Benz, Bentley, Maserati and Porsche.

After Bentley opened a showroom and service center in the Haeundae Marine City in January 2013, Italian automaker Maserati launched a showroom in the Hyundai I-Park apartment complex in October. Lamborghini plans to do the same in the first half of this year.

They come to Haeundae searching for profits, because Busan is the nation’s second-largest city in terms of distribution of wealth and Haeundae is its Fifth Avenue.

According to KB Financial Group Management Research Institute’s annual report on wealth, individuals with financial assets of more than 1 billion won - excluding property assets - were counted as wealthy. In Korea, the population of such people was estimated at 163,000 in 2012, up 14.8 percent compared to the previous year.

By regions, 48 percent of the wealthy (78,000 persons) reside in Seoul, followed by Busan (13,000 persons). When looking at the proportion of rich per 10,000 persons, about 77 residents could be considered wealthy in Seoul, whereas 35 residents were in Busan. Busan was the nation’s No. 1 city in terms of growth of its wealthy population.

“Busan’s real estate market boomed in the last two to three years compared to other regions,” said Noh Hyun-gon, a KB researcher. “So the concentration of the wealthy jumped in Busan and South Gyeongsang.”

The wealth concentration in certain parts of Busan is getting more intensified. In Seoul, the wealthy population in the three posh districts, Gangnam, Seocho and Songpa, dropped to 37.6 percent in 2012, compared to 39.2 percent in 2009. In Busan, that figure jumped to 21 percent in Haeundae District, compared to the high 10 percent range in 2009. The Haeundae Marine City is the center of the rich population shift.

Busan beats Seoul for the number of skyscrapers taller than 200 meters. According to a study done by the Busan metropolitan government, there are 69 skyscrapers of that size nationwide and 36 percent are located in Busan, compared to 20 for Seoul. More than half are in Marine City. In this neighborhood, a village of skyscraper residential-commercial complexes was built. Doosan E&C’s “We’ve the Jenith” complex, completed in 2011, is the tallest building in the neighborhood with 80 floors (301 meters high), followed by Hyundai E&C’s “I-Park” complex with 72 floors (298 meters high).

Geographically speaking, Marine City is downstream of Suyeong River, which flows from the Dongrae District, central Busan, to Haeundae Beach. The residential-commercial complex was built on the Suyeong Bay landfill site, once a neglected area of the city. Now, rich residents enjoy costly hobbies such as yachting near the bay.

Many of the richest people in Busan and the South Gyeongsang regions are known to be living at Hyundai I-Park complex.

According to official statistics on apartment complexes collected by the Ministry of Land, Infrastructure and Transport, Marine City Hyundai I-Park was the third-most expensive apartment complex with prices of 4.1 billion won per each 260- to 280-square meter unit. It was more expensive than the Hyundai I-Park in Samseong-dong, southern Seoul, where similar units are estimated to be worth 3.9 billion won.

The online real estate information network Serve made a nationwide rank last year of districts with residences that cost more than 900 million won. Haeundae District was ninth on the list, rising six places in just five years, with about 1,840 such residences in the area. Prices of residential-commercial complexes have jumped the highest there during recent years.

Most residents are in high-income professions such as corporate owners, CEOs, medical doctors, judges and college professors. Many private residences of state-run agency heads are also located there.

“About half of the Busan Chamber of Commerce and Industry members are known to reside in Marine City,” a real estate agent in the area said. “Some owners of companies based in nearby cities, Changwon and Ulsan, are reportedly living here.”

As a majority of residents are highly wealthy, the neighborhood is equipped with a serious security system. The apartment complexes have infrastructures that enable residents all sorts of leisure activities without having to leave their complexes. The infrastructures include fitness centers, where residents can enjoy a view of Haeundae Beach while working out, wine bars, karaoke and a cinema. Of course, residential and commercial spaces are completely separated.

Meanwhile, hotels in Haeundae are competing against each other to grab VIP customers from Marine City. Hotel Park Hyatt Busan opened in the neighborhood last February.

“Our hotel is located right next to Doosan’s ‘We’ve the Jenith’ and Hyundai ‘I-Park’ apartment complexes, so it is highly popular among residents there as somewhere to have social gatherings and simply take a rest,” said Marc von Arnim, general manager of the hotel. “I can see residents bump into each other here while working out and enjoying coffee.”

Financiers who have worked at their company’s Haeundae branch say rich people in Gangnam and Haeundae are somewhat different in their consumption and investment patterns. They cite the process of building wealth as the major reason.

The wealthy population in Gangnam consists of people in their 60s with real estate assets and young businessmen and people of specialized professions in their 30s and 40s. Meanwhile, owners and CEOs of small and midsize companies are the main wealth holders in Haeundae. In 2012, about 40 of the nation’s 1,000 largest companies in terms of annual sales were based in Busan. According to Samsung Securities investment center’s Busan branch, 832 corporate bodies with assets larger than 10 billion won are based in Busan, while 324 are from Ulsan. When including South Gyeongsang, the figure becomes 1,879 corporate bodies in total.

Because the wealthy population is concentrated in the neighborhood, financial companies compete against each other to attract their business. Regional banks like Busan Bank and national commercial banks such as Woori, Shinhan, KB Kookmin and Hana Bank are strengthening sales activities in the neighborhood.

Because the nation’s key conglomerates’ auto-manufacturing, shipbuilding, shipping and chemical complexes are concentrated in Busan and Ulsan, there are many small suppliers from these cities. As manufacturers of auto and vessel parts have recently grown in terms of technological competency, smaller supplier companies also have prospered, and so have their CEOs and owners.

Small and midsize company owners typically have main creditor banks, with which they have established a longtime relationship, and the owners naturally tend to give their personal business to these banks.

The finance industry expects that the size of financial assets in Haeundae will reach 10 trillion won by 2015, up from last year’s 7 trillion won.